What’s the next move for Luckin Coffee (NASDAQ:LK) stock? Shares in China’s answer to Starbucks (NASDAQ:SBUX) soared after its 2019 IPO. Source: Keitma / Shutterstock.com But,...

Sentiman io
The Battle for Twitter Is About Divided...
Posted on 4th March 2020 by Sentiman io

Left-leaning Twitter (NYSE:TWTR) users were in an uproar over the weekend after a “Republican activist” said he bought a big stake and aimed to oust CEO Jack Dorsey. 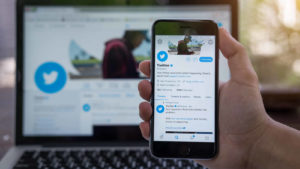 Despite breathless stories in liberal outlets, this is not a political narrative.

Paul Singer’s Elliott Management hedge fund has taken a stake estimated to be worth $1 billion, in a company with a market capitalization of $28 billion. In conventional terms, this should not be enough to move the needle. But there are reasons why the strike might work, and they have nothing to do with politics.

Twitter went public in 2013, at $26 per share, a market cap of $24 billion. But it quickly rose to almost $42 per share. If you bought Twitter in the public market on the day of its IPO, you’re under water now.

Dorsey’s big accomplishment, after re-joining the company he co-founded in 2015, was to gradually match expenses to revenue. Twitter lost over $450 million in 2016, but net income for 2019 was $1.5 billion, on revenue of almost $3.5 billion.

The problem was that, beyond trying to patch holes in the algorithm, sell ads against Tweets and deal with things like bots and trolls, Twitter didn’t change much. Tweets got longer, users learned to thread them and produce stories, but Twitter remained a single, unitary service.

Twitter has become a global brand, but it’s still a single product.

Then there’s CEO Dorsey, who seems to think he’s got a part-time gig.

Square started with a single dongle that let micro-merchants take credit cards. It has since become a financial services company. It pitches itself as “the one-stop run your business shop.” It offers payroll services, invoicing, loans and the kind of real-time analytics only big merchants had before. The stock is trading at $77 per share, a market cap of $35 billion.

No one is asking Jack Dorsey to leave Square.

But when Dorsey said last year he would spend half of this year in Africa, there were at least obvious benefits to Square. The continent has dozens of currencies and borders. Dorsey’s plans for a continent-wide stable coin, tied to the dollar, could take off there. Square could also take off there.

I’m not being the Geico Pinocchio when I say that Twitter has huge potential.

We could have paid Twitters, subscription Twitters and private Twitters. We could have Twitter integrated with other applications, embedded in games or markets. Some of these ideas won’t work, but none have yet been tried.

A full-time boss could try them. Dorsey isn’t hurting. He’s worth about $5 billion. That’s $1.5 billion more than Elliott’s Paul Singer is worth.

But Singer has real grievances. Twitter is an underdeveloped asset. Dorsey has done fine work, but Twitter needs more. It needs a full-time manager. That’s an argument that resonates among investors, who buy stock to watch its value grow.

The Bottom Line on TWTR Stock

Dorsey has allies, like Tesla (NASDAQ:TSLA) CEO Elon Musk, who recently tweeted his support. The question is whether those friends are willing to put their money where their tweets are.

Singer has put Twitter in play. It might make a tasty morsel for any of the major cloud companies, which are worth as much as 40 times more than its $28 billion. Even a Comcast (NASDAQ:CMCSA) or AT&T (NYSE:T) might find Twitter affordable.

That’s what Singer is banking on.

Dana Blankenhorn has been a financial and technology journalist since 1978. He is the author of the environmental thriller Bridget O’Flynn and the Bear, available at the Amazon Kindle store. Follow him on Twitter at @danablankenhorn. As of this writing he owned no shares in companies mentioned in this story.

Jack Dorsey can fend off Paul Singer because he’s worth more. But forlorn TWTR stock is also worth more than its current share price.

White supremacist propaganda in US more than doubled in 2019: ADL

Incidents of white supremacist propaganda distributed across the nation jumped by more than 120 percent between 2018 and last year, according to the Anti-Defamation League, making...

South Africa’s ruling party said it is launching a “Black Friday” campaign in response to the “heinous murder” of George Floyd and...