Who Is Still Buying VHS Tapes?

Michael Myerz, 29, an experimental hip-hop artist in Atlanta, who has a modest collection of VHS tapes, finds the medium inspirational. Some of what Mr. Myerz seeks in his work,...

Djokovic marginally ahead of Medvedev for final, feels Corretja

Sport Novak Djokovic will need to be at his best to beat Russian Daniil Medvedev in Sunday’s Australian Open final but the eight-time champion will be slightly ahead due to...

MELBOURNE: Novak Djokovic says going unbeaten in eight Australian Open finals will give him confidence in Sunday’s decider, but he’ll need more than that to overcome...

Have you ever staked your crypto assets on Defi Platforms? Do you know that this process can be automated? Do you know what Beefy.Finance is? If your answer to any of the above...

NEW DELHI: Indian cricket superstar Virat Kohli has revealed that he struggled with depression and felt like the “loneliest guy in the world” after failing with the...

Tennis: ‘He tricks you’ – Medvedev keeps opponents in check

MELBOURNE: Confidence is king and Daniil Medvedev has plenty of it, with the affable Russian morphing into not just one of tennis’s best players and premier athletes, but...

Sport Novak Djokovic may be unbeaten in Australian Open finals, but a sponsor seemed to think he’s already won this year’s – before he’s even played it....

Controversy still surrounds a liquidated New Zealand cryptocurrency exchange, which allegedly got hacked again. Adding to the $30 million stolen in 2019, Cryptopia reports that it...

Who Is Still Buying VHS Tapes?

Michael Myerz, 29, an experimental hip-hop artist in Atlanta, who has a modest collection of VHS tapes, finds the medium inspirational. Some of what Mr. Myerz seeks in his work, he said, is to replicate the sounds from “some weird, obscure movie on VHS I would have seen at my friend’s house, late at night, after his parents were asleep.” He described his work as “mid-lo-fi.” “The quality feels raw but warm and full of flavor,” he said of VHS.

For collectors like April Bleakney, 35, the owner and artist of Ape Made, a fine art and screen-printing company in Cleveland, nostalgia plays a significant role in collecting. Ms. Bleakney, who has between 2,400 to 2,500 VHS tapes, views them as a byway connecting her with the past. She inherited some of them from her grandmother, a children’s librarian with a vast collection.

Ms. Bleakney’s VHS tapes are “huge nostalgia,” she said, for a child of the 1980s. “I think we were the last to grow up without the internet, cellphones or social media,” and clinging to the “old analog ways,” she said, feels “very natural.”

“I think that people are nostalgic for the aura of the VHS era,” said Thomas Allen Harris, 58, a creator of the television series “Family Pictures USA” and a senior lecturer in African-American studies and film and media studies at Yale University. “So many cultural touch points are rooted there,” Mr. Harris said of the 1980s. It was, he believes, “a time when, in some ways, Americans knew who we were.”

The VHS tape, of course, had a life span. Developed in Japan in 1976, brought to the United States in 1977, and essentially discontinued in 2006 when films stopped converting to tape, this medium brought all kinds of entertainment home.

Not only could film connoisseurs peruse the aisles of video stores on Friday nights, but they could also compose home movies, from the artful to the inane. In an era that preceded DVR technology, they could tape episodes of television with the record function of the now-defunct VCR.

Despite the rise of streaming, there is still a vast library of moving images that are categorically unavailable anywhere else. Also a big nostalgia factor. 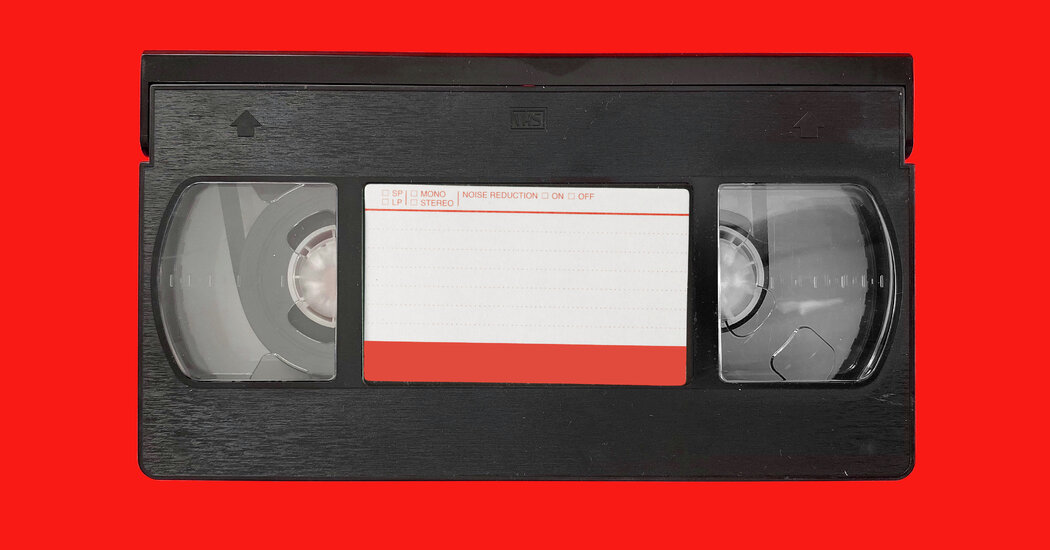 Would You Like to Come Over for Dinner … in 10 Years?

I like people. I sort of like cooking. Historically, this has all added up to an interest in entertaining that would not be called passionate but could certainly pass for healthy....

Two decades ago, Cheryl Mendelson shocked Americans by informing us that there is a right and a wrong way to use a broom. She did this in a book that was scholarly, opinionated...