US: Biden to visit Kentucky, state battered by floods and heat

Fulham could be without winger Harry Wilson for more than eight weeks due to a knee injury, manager Marco Silva said on Friday (Aug 5) although he believes the Welsh international...

Is the Housing Market Going to Crash? 5 Experts Weigh In.

The notion of a housing market crash has been a point of contention between economists for most of the year. Some argue there are too many barriers to a steep fall in price to...

The Verge Review of Animals: Bibi the hippo

This column is part of a series where Verge staffers post highly subjective reviews of animals. Up until now, we’ve written about animals without telling you whether they suck or...

LONDON : Sarah Bovy had some doubts when she and her team mates were told they would be racing in pink suits and a pink-liveried car this season, but success on the track with the...

The 2022 bear market has been brutal as more than $2 trillion in value has been wiped away from the crypto economy. In addition to record values lost, the crypto winter has...

What Is Going on With Bed Bath & Beyond (BBBY) Stock Today?

Formula One: McLaren told Ricciardo that Piastri will replace him, reports say

LONDON (REUTERS) – McLaren have told Daniel Ricciardo that fellow Australian Oscar Piastri will be replacing him at the Formula One team next season, according to media...

US: Biden to visit Kentucky, state battered by floods and heat

US President Joe Biden will travel to Kentucky on August 8 to meet with officials and families hit by disaster.

US President Joe Biden and First Lady Jill Biden will travel to Kentucky to meet with people who have been affected by floods that have devastated the state, according to the White House. The floods have killed several dozen people and left others stranded.

The Bidens will travel to Kentucky on August 8, where they will meet with Kentucky Governor Andy Beshear and his wife the First Lady, impacted families and observe recovery efforts.

Weary residents have had little respite, as high temperatures bake the state and damaged water systems deprive some of access to clean water. Search and rescue teams continue to comb flooded areas.

“It is absolutely devastating out there,” Beshear said. “It’s going to take years to rebuild. People left with absolutely nothing. Homes that we don’t know where they are, just entirely gone. And we continue to find bodies of our brothers and sisters that we have lost.”

At least 37 people have been killed in the flooding, and more than 3,000 residents remain without electricity. High temperatures this week have created an additional challenge for residents struggling to recover, and the National Weather Service (NWS) has issued flood warnings as thunderstorms bring the possibility of further rainfall.

As climate change contributes to the heightened intensity of natural disasters like flooding, extreme heat and wildfires across the US, government authorities and residents are reeling from the scale of the devastation.

Kentucky could receive more than three inches (76mm) of additional rain by Friday night, and Governor Beshear was forced to cancel plans to visit areas touched by flooding on Friday due to unsafe travel conditions.

Due to unsafe travel conditions, the Governor’s trip to Pike and Letcher counties has been canceled. Gov. Beshear will brief the media on flooding in Eastern Kentucky at 12:30 p.m. EDT today. Watch live via https://t.co/n7homY7tSv or https://t.co/ofGhdJMJFP for closed captions.

The National Guard has been tasked with distributing bottled water to residents after water systems were damaged or destroyed in the flooding, and has distributed nearly 12,000 cases of water so far.

“We’re going to deliver water until these counties and areas beg us to stop delivering water,” Governor Beshear said Thursday. “As hot as it is, with as many systems that are out, we want a mountain of water there.”

The oppressive heat added yet another layer of misery to recovery efforts, and Beshear warned residents and workers to be mindful of the danger posed by extreme heat.

“Extreme heat, extreme humidity, that’s stressful in itself,” Jerry Stacy, the emergency management director in Perry County, told the Associated Press news agency. “We’re just fighting through this and hoping that this weather don’t make it too stressful. It don’t get a lot worse than what it is.”

Biden has approved a federal disaster declaration for the state, an action that frees up additional funds and resources to assist with recovery and rebuilding efforts, which are expected to take at least a year.

The administration has announced more than $1bn in grants for states seeking to address flooding and extreme heat exacerbated by climate change.

Other cities across the United States, such as St Louis, Missouri and Las Vegas, Nevada, have also been hit hard by flooding over the last week. In June, Yellowstone National Park, one of the country’s best-known national parks, closed because of flooding that swept away entire roads.

In states such as Texas and California, extreme heat has tested the limits of infrastructure and heightened enormous wildfires, prompting evacuations.

US President Joe Biden will travel to Kentucky on August 8 to meet with officials and families hit by disaster. 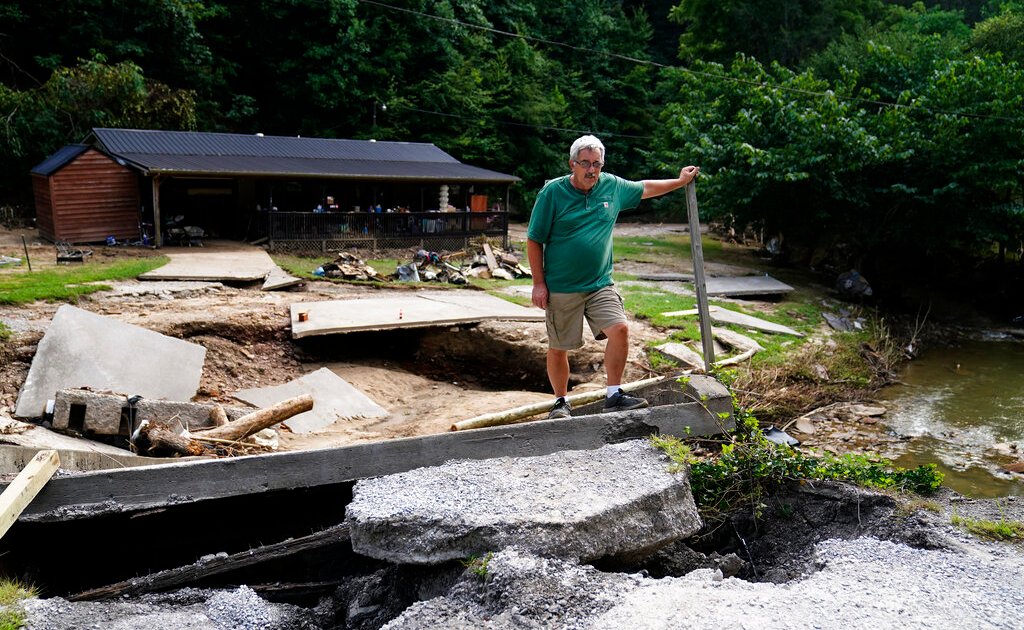 Spain is to begin 10 days of mourning on Wednesday in memory of the more than 27,000 people who have lost their lives to the coronavirus. Flags will fly at half-mast. ...

Timeline: How the new coronavirus spread

The World Health Organization (WHO) has declared a pandemic over a new coronavirus which causes an illness known as COVID-19 that has spread to nearly every country. The disease...