Turkey has threatened “legal and diplomatic” action against the French satirical newspaper Charlie Hebdo after it published a caricature of president Recep Tayyip Erdoğan on its...

Trump to gut protections in Alaska’s Tongass forest, the ‘lungs of the country’

ALTO DE MONCALVILLO, Spain: Slovenian Primoz Roglic pulled off a brilliant late attack to win stage eight of the Vuelta a Espana on Wednesday (Oct 28) and eat into the overall...

World Trade Organization Sources say it is unclear if move is attempt to sabotage trade body much criticised by Trump Ngozi Okonjo-Iweala, the former finance minister of Nigeria,...

If you’re on the market for a portable gaming laptop that serves the dual purposes of running demanding games and making everyone around you jealous, look no further than the MSI...

Joe Rogan, Spotify’s biggest podcast star, has left the platform in an awkward position after conducting a lengthy interview with Alex Jones, the conspiracy theorist banned by...

Microsoft first revealed the Xbox Series X nearly a year ago, and the internet went wild and immediately compared it to a fridge. A meme was born, and Microsoft embraced it to...

Earlier this month, CBS’s Evil dropped its first season on Netflix. It arrived after what had felt for me like a listless few months; very little pop culture could hold my...

Where to buy Nvidia’s RTX 3070 graphics card, starting at 6AM PT on Thursday

Turkey has threatened “legal and diplomatic” action against the French satirical newspaper Charlie Hebdo after it published a caricature of president Recep Tayyip Erdoğan on its latest front page.

The drawing described as “disgusting” by the Turkish leader and Ankara’s announcement that prosecutors have launched an official investigation into the publication have worsened already heightened tensions between the two countries.

He told the Turkish parliament he had not seen the latest caricature and would not be looking at it. He is depicted in his underwear lifting up a woman’s hijab to reveal her buttocks.

“I consider it wrong to look at these immoral publications … scoundrels who insult our beloved Prophet,” Erdoğan told MPs. “I believe the enemies of Turkey and Islam are going to drown in a swamp of hatred and animosity in the name of freedom. It’s a sign that Europe has returned to the dark ages.”

It has been announced that the Ankara public prosecutor’s office has opened an inquiry into the directors of Charlie Hebdo, while France is to seek EU sanctions against Turkey.

Clément Beaune, France’s Europe minister, told the French Sénat: “We will be pushing for European measures as a strong reaction, including the possible use of sanctions.” He added each day Erdoğan was further pushing the boundaries of what was “acceptable” and accused Turkey of “scattergun provocations”.

Even before the latest Charlie Hebdo caricature, France’s diplomats have been trying to calm protests around the Islamic world where portraits of the French president have been burned along with calls to boycott French products.

“They each have their problems and a robust position with regard to France. Their response is political manipulation,” one official said, adding that there was an additional problem of understanding the concept of French “laicité” or secularism.

“The president has explained what it means but there has been a distortion of his statements. He did not say France would continue to caricature the Prophet, he said it was part of the exercise of freedom of expression in France to allow the media to do so,” the official said.

“We defend the freedom of the press. It is not the president who fixes the limits of what the press can do. There is no crime of blasphemy in France and to caricature is a very old tradition.”

The backlash began after police raids on Islamic organisations and individuals following the death of Samuel Paty, the 47-year-old teacher who was beheaded after showing pupils caricatures including one of the Prophet Muhammad, published by Charlie Hebdo, as part of a discussion on free speech. Standing outside Paty’s school on the night of the killing, Macron said France was facing an “existential” fight against terrorism. In his address at a national ceremony honouring the slain teacher last week, Macron evoked “political and radical Islamism, which leads to terrorism” adding: “We will not renounce caricatures, drawings, even if others are backing down”.

Its roots, however, date back to an earlier speech by Macron on 2 October outlining a new law to promote secularism in France and combat religious “separatism” in which he addressed Islam and Islamist extremism. The law, to be presented to ministers in December, was drawn up after consultation with France’s main Muslim organisation the Conseil Français du Culte Musulman (CFCM).

The president sparked anger when he declared Islam “a religion which is experiencing a crisis today, all over the world”; the influential Sunni university Al-Azhar in Cairo described his suggestion as “racist and likely to inflame the feelings of two billion Muslims across the world”.

Elysée officials insist the president’s comments were not aimed at Muslims. “This is not about Muslims in France, it is about violent extremists in France; people who fall into extremism, violence, fundamentalism and who do a disservice to Muslims. They are enemies of Islam. Let us be clear, for us, there is no confusion between Muslims and those extremists who carry out acts of terror, despite some people trying to create this confusion,” said the Elysée source.

“The struggle is against these extremists and in this we have the support of Muslims in France who are our allies.”

Support for France has been echoed in 24 of the 26 European Union states.

In the Somali capital Mogadishu, protestors shouted: ”France down, it insulted our Prophet”, while in Cairo, Egyptian President Abdel-Fattah al-Sisi said freedom of expression should stop if it offended more than 1.5 billion people.

The Grand Imam of Egypt’s al-Azhar university, one of the world’s most eminent seats of Sunni Muslim learning, urged the international community to criminalise “anti-Muslim” actions. Iranian protestors gathered in front of the French embassy in Tehran, state media reported. Some held up placards with red crosses plastered on images of French goods. In Dhaka, hundreds of Bangladeshi Muslims took to the streets of the capital for a third consecutive day, chanting slogans such as “Boycott French products” and burning effigies of Macron, whom they described as an enemy of Islam.

The Elysée said it regretted that in all the sound and fury of the international anti-France and anti-Macron protests, the brutal killing of Paty, was being overshadowed.

“From time to time things are said that can hurt people’s sensibilities. But what can justify the death of a professor? We don’t kill someone because we don’t agree with them,” an official said.

Turkey has threatened “legal and diplomatic” action against the French satirical newspaper Charlie Hebdo after it published a caricature of president Recep Tayyip Erdoğan on its latest front page.

The drawing described as “disgusting” by the Turkish leader and Ankara’s announcement that prosecutors have launched an official investigation into the publication have worsened already heightened tensions between the two countries. 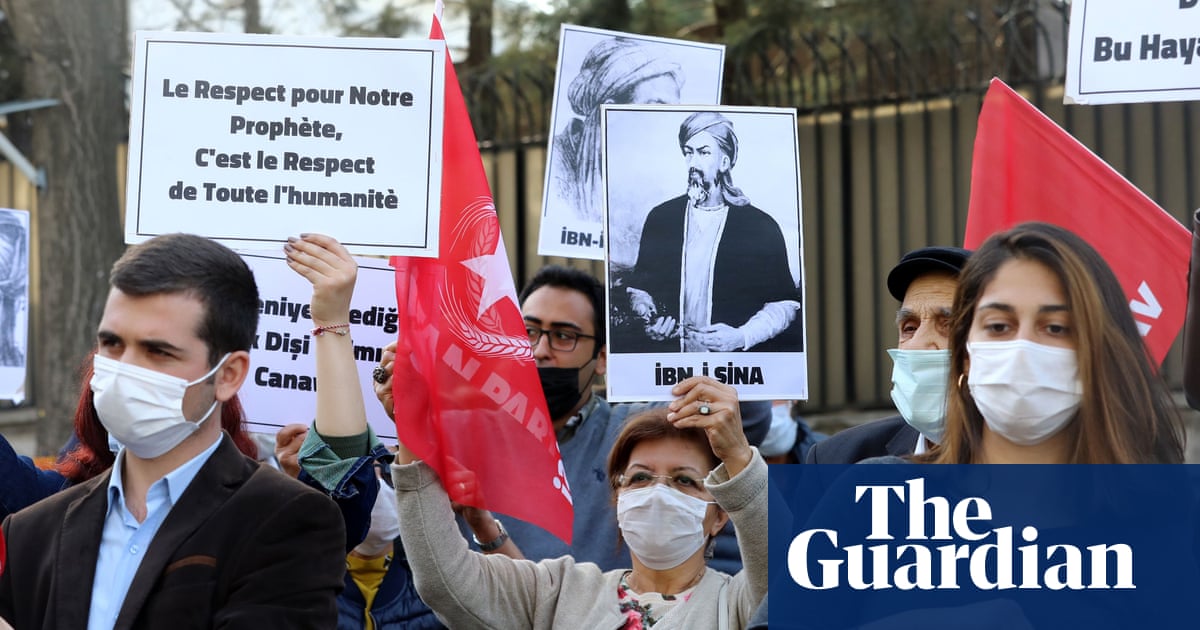 BRIT tourists won’t be allowed back to Tenerife until at least October, island bosses said. Regional government chiefs say the plan is to open hotels in July or August for...