Since mid-2018, the selloff in Chesapeake Energy (NYSE:CHK) stock has been relentless and painful for dip-buyers. Holdouts can blame falling energy prices all they want, but there are red flags that investors would be advised to pay close attention to, lest they suffer further losses. 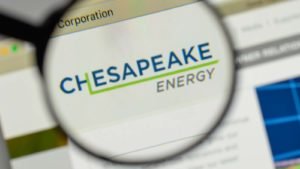 I’ve assigned a rating of ‘F’ for Chesapeake stock, but for good reason. There are times when low prices beget lower prices, and I expect this to be the case with Chesapeake Energy shares, even if oil and gas prices stabilize.

Don’t get me wrong — I’m not entirely against taking a stake in the oil-and-gas exploration-and-production sector of the economy. As is the case with any popular market sector, you can find good stocks and not-so-good stocks. Having a filter in place is part and parcel of selecting stocks that are worth owning.

Before we examine Chesapeake’s fundamentals, we can look at the stock’s history of price action and already see the red flags flying. Chesapeake shares were over $62 a piece back in the summer of 2008 and down to $3 and change in April of last year. But now they’ve breached the 25 cent level. That makes it a penny stock by the Securities and Exchange’s definition, but could it actually become a penny stock in the literal sense?

MKM Partners analyst John Gerdes seems to think so. In fact, he cut his price target on Chesapeake stock from $1 to zero, something you don’t hear every day in the analyst community. Gerdes also downgraded his rating on the company’s stock from neutral to sell.

The analyst framed his zero-price target as a warning that a “discount” isn’t always a good thing. According to Gerdes, “CHK shares should depreciate ~100% to $0 per share assuming a 17.5% equity discount rate … At the Feb. 27, 2020 closing price of $0.26 per share, CHK’s implied equity return is nil.”

This isn’t the first time Chesapeake has received negative publicity. Back in November, the company horrified investors and analysts with the dreaded phrases “going concern” and “default” in a 10-Q filing:

“If continued depressed prices persist, combined with the scheduled reductions in the leverage ratio covenant, our ability to comply with the leverage ratio covenant during the next 12 months will be adversely affected which raises substantial doubt about our ability to continue as a going concern … Failure to comply with this covenant, if not waived, would result in an event of default.”

The filing also raised the specter of “the potential acceleration of outstanding debt,” suggesting the persistence of a deeply negative cash flow. Chesapeake has since removed its “going concern” in a more recent SEC filing, but that’s cold comfort to battered shareholders. This is especially true after the S&P Dow Jones Indices has already dropped CHK from the S&P MidCap 400 index.

Is a listing on the pink sheets next for Chesapeake? Is the stock really headed for zero?

The outlook remains grim, as the company recently reported a fourth-quarter net loss of $346 million, which translates to 18 cents per share. Moreover, Chesapeake’s quarterly revenue declined by 31% to $1.93 billion, thereby underperforming the FactSet analyst consensus of $2.02 billion.

All of this has evidently prompted Chesapeake President and CEO Doug Lawler to threaten a reverse-stock split, saying, “[W]hile we have stock prices fall into very low levels, we will commence actions to reverse split the number of shares with the filing of the proxy in a few weeks.”

My Final Thoughts on CHK Stock

“Going concern” are two bad words in the investing community, and for Chesapeake Energy stockholders, those words have been replaced by the equally bad two words “reverse split.” A price target of zero is harsh, I’ll grant you that. But given the alarming facts surrounding this embattled company, CHK stock might actually reach that unfortunate target.

Louis Navellier had an unconventional start, as a grad student who accidentally built a market-beating stock system — with returns rivaling even Warren Buffett. In his latest feat, Louis discovered the “Master Key” to profiting from the biggest tech revolution of this (or any) generation. Louis Navellier may hold some of the aforementioned securities in one or more of his newsletters.

Any pause in the selloff in Chesapeake Energy should be viewed as temporary. Therefore, CHK stock is one to avoid.

Countries around the world are scrambling to halt the spread of the coronavirus pandemic. As of June 9, more than 406,000 people worldwide have died of COVID-19, the highly...

On May 18, President Trump met with several leaders and executives from the restaurant industry. By now, we’re all familiar with how a wide range of businesses have suffered as a...