Europe’s air TWICE as clean as it was before coronavirus as people forced to stay home, new satellite pics reveal

SWEDEN has seen another spike in coronavirus cases today with another 613 positive tests — yet its pubs remain open and packed full of drinkers. The Scandinavian country has...

The 5 Best Stocks to Buy for Beginners As Markets Rebound

Looking to start investing in stocks? Today’s market may be a great entry point! Yes, the novel coronavirus may have battered down stock prices. But that’s exactly the kind of...

Amid the novel coronavirus pandemic, I realized something. For the first time in a very long time, the world is united (generally speaking) toward a common goal: getting back to...

While the world is still reeling from the crisis that the novel coronavirus has brought upon the world, bank stocks are reporting earnings this week. The reactions even after some...

Triage Your Portfolio With Abbott Laboratories

The novel coronavirus has made Abbott Laboratories (NYSE:ABT) stock a star. Source: testing / Shutterstock.com Shares are now up 9.4% for the year, about as much as the Nasdaq...

[Editor’s note: “10 Best Stocks to Buy and Hold Forever” was previously published in March 2020. It has since been updated to include the most relevant information available.]...

BP Stock Should Be on Your List, but Don’t Pull the Trigger Just Yet

WHO says Europe in coronavirus ‘eye of the storm’: Live updates

The total number of coronavirus cases in the world has surpassed two million and more than 137,000 people have died, according to data compiled by the Johns Hopkins...

SWEDEN has seen another spike in coronavirus cases today with another 613 positive tests — yet its pubs remain open and packed full of drinkers.

The Scandinavian country has taken a markedly different approach from the rest of Europe, which is on lockdown.

Despite the rise in deaths, Sweden is yet to introduce stricter suppression and social distancing orders such as closing bars, restaurants, non-essential shops and schools.

Nor has it placed citizens in near-total lockdown, as in Italy, Spain and France.

Sweden is continuing to hold out against a national lockdown despite growing criticism and calls for “rapid and radical measures” to contain the outbreak.

The 613 new cases reported today are the highest 24-hour jump since 722 new infections were added to the tally a week ago.

The 5.1 per cent increase is also the highest since last week, at a time when many countries are seeing their infection rates slow down. 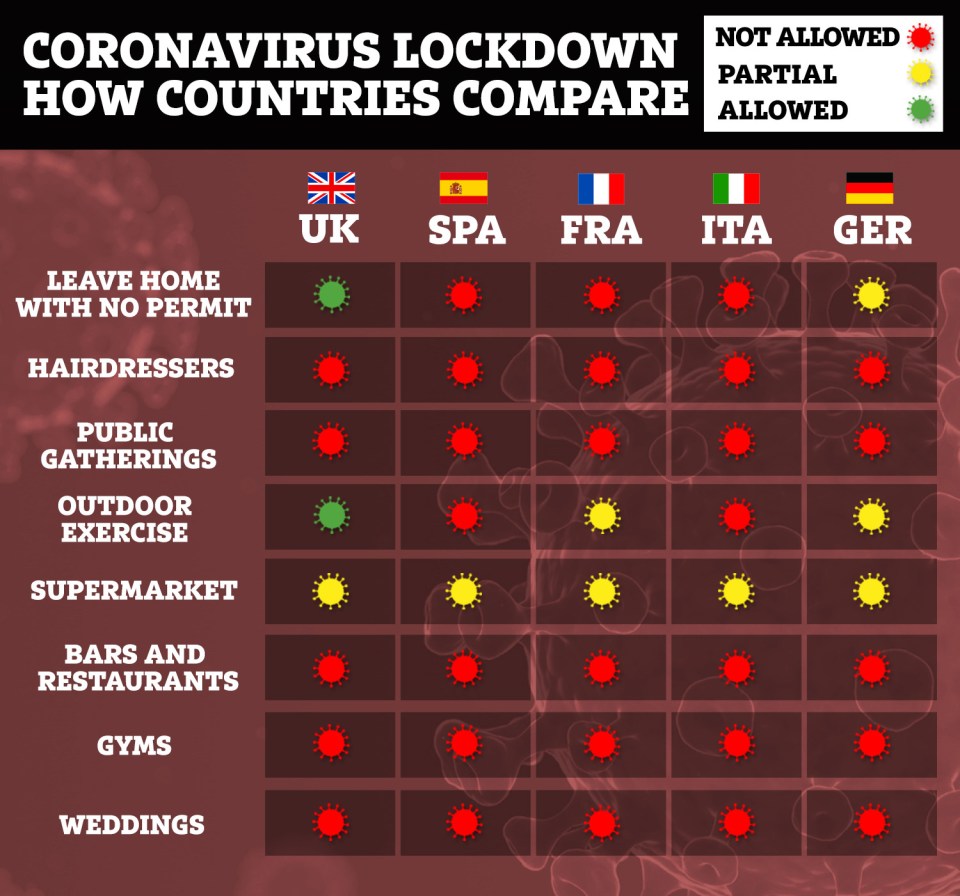 Bars and restaurants are still open in Sweden along with primary schools, and public gatherings of 50 people are still permissible.

Shops are also open, and the Government has emphasised taking “personal responsibility” for social distancing rather than enforcing it.

They added: “In the current situation, people in Sweden are on the whole acting responsibly to reduce the spread of infection by, for example, restricting their social contacts.

“This crisis may continue for a long time, and in order for the measures to work over time, people need to understand and accept them.”

MADE OF TOUGH STUFF


Creepy crawlies that really will sneak up on you – but can you spot them?

Sweden’s leaders have come under criticism from the scientific and medical community, both nationally and internationally, for refusing to lockdown.

One expert Sweden’s population could be infected with the coronavirus by the end of the month while others have warned of catastrophe.

Sweden’s public health agency says 565 cases were reported on Wednesday, up from 440 on Tuesday and 420 on Monday.

The agency says more than 5,000 of Sweden’s 12,540 cases area in the Stockholm region, with 214 new cases confirmed there yesterday.

SWEDEN has seen another spike in coronavirus cases today with another 613 positive tests — yet its pubs remain open and packed full of drinkers. The Scandinavian country has taken a markedly different approach from the rest of Europe, which is on lockdown. ⚠️ Read our coronavirus live blog for the latest news & updates […]

CHINA has been accused of hushing up human transmission of the coronavirus for six days – potentially dooming the world to the pandemic. Communist Party officials knew of...

SHOCKING footage of a bakery worker contaminating batches of bread rolls amid the coronavirus crisis has sparked outrage in Ecuador. The disgusting clip was widely shared after...