Sport Frenchman Rudy Gobert, the first NBA player known to have tested positive for the coronavirus, is donating more than US$500,000 to support both the employee relief fund at...

OVER 47 million people in Spain will be put into partial lockdown on a 15-day state of emergency to fight the spread of coronavirus. In a televised announcement to the public,...

Badminton: Taiwan’s Chou to face Axelsen in All England final

LONDON: Taiwan’s Chou Tien-chen and Denmark’s Viktor Axelsen will meet in the final of the All England Championships after taking contrasting routes through their...

BURIALS in a Coronavirus hit Italian town are taking place every half an hour it emerged yesterday. Italy has seen an unprecedented 21,157 cases with 1,441 deaths making it the...

Prior to the market carnage on March 12, the Grayscale Bitcoin Trust (GBTC) had acquired over 300,000 BTC. Grayscale’s trust has been one of the longest-running FINRA approved...

Apple puts restrictions on coronavirus-themed apps in its App Store

In an effort to ensure the “credibility” of health and safety information in its App Store, Apple is tightening requirements for all coronavirus-focused apps, TechCrunch reports....

Alexandria Ocasio-Cortez has said billionaires are immoral, but Bill Gates and Jack Ma are have done far more than the New York congresswoman to help fight the coronavirus. The...

HALIFAX/DARTFORD, England: England’s Premier League and 72-team Football League closed down on Saturday due to concerns over the coronavirus but clubs in the fifth tier and...

What’s next for other sports?

BASKETBALL The National Basketball Association was suspended indefinitely from Thursday. NBA commissioner Adam Silver has said it will last at least 30 days. FOOTBALL The June...

New exercises invented every week. New gurus trending by the day. Fresh studies to contradict previous findings. But the science never gets old. Haven’t had enough of the...

OVER 47 million people in Spain will be put into partial lockdown on a 15-day state of emergency to fight the spread of coronavirus.

In a televised announcement to the public, Prime Minister Pedro Sanchez said that the people of Spain are not to leave their homes unless absolutely necessary.

Spaniards will only be allowed to leave to buy food, medicines, go to hospital or work – with limits on freedom of movement starting from midnight tonight.

The death toll in the country has hit 191, the fifth highest number of deaths after behind China, Italy, Iran and South Korea.

Spanish authorities said the number of infections climbed past 6,046, half of them in the capital, Madrid. That represents a national increase of over 1,500 in 24 hours.

Sanchez said he was aware the measures will have a major impact on citizens and businesses but promised the government would do all it can to mitigate the impact.

“I want to tell the workers, the self-employed, and businesses that the government of Spain is going to do everything in its power to cushion the effects of this crisis,” he said.

Bars, restaurants, shops selling anything but food and other basic staples, conference centres and all leisure and sports activities – including cinemas, theatres, swimming pools or football grounds – will be shut down.

Police were seen ushering people from beaches and are expected to carry out searches of vehicles to make sure people are only leaving their home for the right reasons. 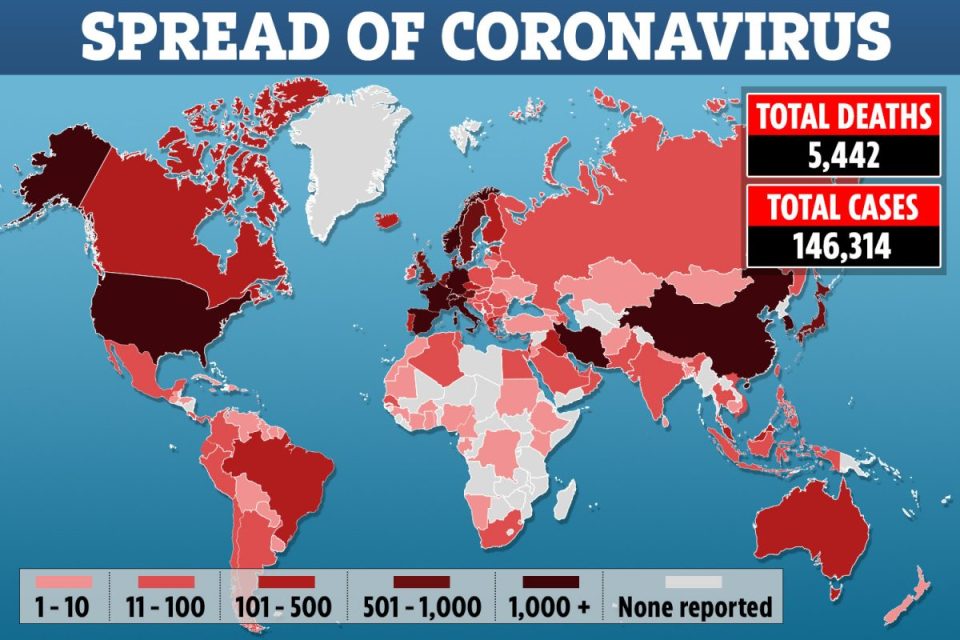 Public transport will be curtailed, with medium-distance rail operators ordered to reduce their services.

The decree does not, however, foresee closing the country’s borders.

Spain’s Interior Ministry will control all police forces, including local and regional ones, under the 15-day emergency, and the armed forces would be on stand-by to help if needed.

The health and transport ministries would also have nationwide reach, taking over some local or regional powers, according to the plan, which Catalan and Basque leaders immediately criticised after it was leaked as a draft.

Spain is the second hardest-hit country in Europe after Italy, with 193 deaths and 6,250 cases so far, public broadcaster TVE said, well up from 120 deaths reported on Friday.

With schools shut across Spain and a first package of economic steps announced on Thursday, the government had also been expected to announce economic and social measures on Saturday to mitigate the impact of the fight against the coronavirus.

But ministers failed to agree in a seven-hour cabinet meeting on Saturday on what these should be, a source close to the negotiations told Reuters.

Shoppers packed supermarkets in Spain in the morning despite pleas for calm from authorities. But overall, the normally bustling streets of the country’s two biggest cities were noticeably quieter as the message sank in that social distancing is the only way to stop the pandemic.

We had to close and remain shut for 15 days, restaurant owner Rachel Paparardo said in Barcelona, which was already under regional restrictions. But this is nothing. It is just so more people dont get infected and we can recover from this.”

Some flights bound for Spain turned around as word spread of the lockdown.

Lynda Kelly, 62, and her husband Barry Kelly, 67, said they had been ready to go on their Birmingham to Alicante flight this morning – when they were suddenly told the Spanish borders had been closed.

Speaking to the Sun Online, Lynda said: “The flight was probably half full at tops, it wasn’t very busy.

“Everybody was on the plane by about 7am but the captain came on and said he was waiting for some paperwork to come through.

Most read in news

“Then the captain came on and said awfully sorry but he just heard Spain had closed its borders.”

The couple were then forced to head back home – only to discover it had instead been Jet2’s decision to not fly, rather than the airspace being closed.

She added: “It’s disappointing they couldn’t tell the truth.

“I think they didn’t tell us so no one would ‘kick off’ on the plane.”

OVER 47 million people in Spain will be put into partial lockdown on a 15-day state of emergency to fight the spread of coronavirus. In a televised announcement to the public, Prime Minister Pedro Sanchez said that the people of Spain are not to leave their homes unless absolutely necessary. ⚠️ Read our coronavirus live blog […]

A JAPANESE man who appeared to have recovered from coronavirus tested positive again less than three weeks after he left a medical facility where he was being treated. The...

THIS is the shocking moment cops squashed a topless man wielding two samurai while claiming he has coronavirus swords between patrol cars. The rotund suspect refused to give up...