LONDON (AFP) – The mayor of Liverpool fears restarting the Premier League could lead to the “farcical” situation of fans congregating in large groups outside Anfield despite the...

RISHI Kapoor’s devastated family have gathered in Mumbai for his last rites after the Bollywood legend passed away yesterday. Kapoor, who played the romantic lead in dozens...

SPAIN is about to announce new time slots to lift quarantine and allow people out of their homes after one of the hardest lockdowns in Europe. The new time slots will ensure the...

THE world’s dodgiest DIY haircuts are revealed as desperate families try to tame their manes during the coronavirus lockdown. With hairdressers and barbers closed for more...

Never Count Apple Stock Out, Even While It’s in a Storm

Over the past two months, we’ve been hit with one bad headline after another regarding the novel coronavirus. Just recently, the Congressional Budget Office released data that...

Al Jazeera Digital’s current affairs podcast, The Take, has won a silver and bronze medal in the 2020 New York Festivals Radio Awards. Adding to its medal count from the...

More than 3.8 million people in the US filed new claims for jobless benefits over the past week, bringing the six-week total since the beginning of coronavirus-related...

‘No one’s looking out for us’: Mexico medical workers beg for PPE

Oaxaca, Mexico – For three years, Patricia* has trained to be a surgeon at a Mexico City hospital where there is a chronic lack of surgical equipment. Each winter when...

Coronavirus disrupts the world: updates on the pandemic

A new coronavirus appeared in Wuhan, China, at the start of December, and it has since infected millions of people all over the world. In March, the World Health Organization...

Oculus sales spiked in the lead-up to Half-Life: Alyx

Despite pandemic-related hardware shortages, Facebook’s virtual reality business exploded at the start of 2020. The company revealed yesterday that it made $297 million in...

SPAIN is about to announce new time slots to lift quarantine and allow people out of their homes after one of the hardest lockdowns in Europe.

The new time slots will ensure the elderly are kept apart from children when they both get to go outdoors for the first time in months on Saturday.

Spanish Health Minister Salvador Illa is set to announce the new measures later today to allow the elderly and children a desperately needed chance to get out after coronavirus quarantine.

OAPs are expected to be told they can go out for a walk in the mornings before children get their chance to go out in the afternoon with one of their parents.

Runners and others enjoying their first opportunity to practice individual sport outdoors for the first time in seven weeks are likely to be told they must pick early morning or late night time-slots when the other two groups are back inside.

Mr Illa will explain the details later this afternoon after a morning TV address set for 11am was postponed.

CORONAVIRUS CRISIS – STAY IN THE KNOW

Don’t miss the latest news and figures – and essential advice for you and your family.

Get Britain’s best-selling newspaper delivered to your smartphone or tablet each day – find out more.

Spanish Transport Minister Jose Luis Abalos said the measures are being taken to avoid an “explosive” mix of the young and old.

Saturday will see the second major relaxation of Spain’s strict coronavirus lockdown, which began in mid-March.

As of Sunday, April 26, children under 14 have been allowed outdoors for the first time in six weeks but must be accompanied by only one parent for up to an hour a day.

Spain is making an aggressive comeback after millions were sent back to work April 13, including non-essential workers.

Regional premiers labelled the ruling as “reckless”, “unforgivable” and “imprudent” at the time.

Beaches in some parts of Spain were opened up to young people to maximise space and allow social distancing.

The Spanish government still needs to formally outline exercise restrictions for adults looking forward to an outdoors run this Saturday, though it will likely be similar to the social distancing rules we have in the UK.

Spanish PM Pedro Sanchez announced a four-phase Covid-19 de-escalation plan on Tuesday, which will kick off on some Canary Islands and Formentera in the Balearic Islands on Monday.

Hotels on the islands have been allowed to re-open, although hoteliers there and in other parts of Spain who expecting to be able to re-open on May 11 say they intend to stay shut because there are no tourists yet.

REGRETS, HE’LL HAVE A FEW

Travel between provinces and islands in Spain has been banned until at least June 22.

Authorities have not said when air and land borders will be reopened for foreign tourists. 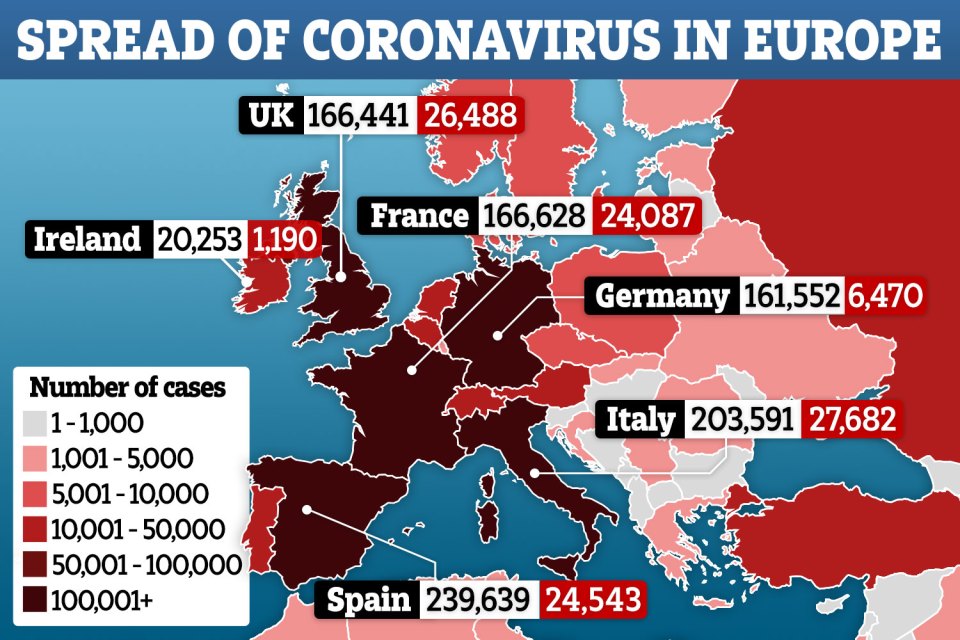 SPAIN is about to announce new time slots to lift quarantine and allow people out of their homes after one of the hardest lockdowns in Europe. The new time slots will ensure the elderly are kept apart from children when they both get to go outdoors for the first time in months on Saturday. ⚠️ […]

Katharine Murphy talks to Liberal MPs Katie Allen and Jason Falinski about Covid’s impact on aged care in Australia and the royal commission findings that the sector is ‘unfit for...

A JAPANESE man who appeared to have recovered from coronavirus tested positive again less than three weeks after he left a medical facility where he was being treated. The...