For the past two months, Palantir Technologies (NYSE:PLTR) has been in sell-off mode. Due to disappointing earnings, plus the cycling out of tech growth stocks ahead of planned...

Harare, Zimbabwe – Samuel Chikengezha, a 35-year-old fireman, sits on a sofa in his modest home, staring at the television set while he stresses over how he’ll make ends meet this...

Novak Djokovic Q&A: a wild day, what happens next and the legal view

Novak Djokovic Q&A: a wild day, what happens next and the legal view After another extraordinary day in the Novak Djokovic saga ahead of the Australian Open, what now for the...

There is anxiety in the England women’s camp after a member of their support staff tested positive for COVID-19 ahead of the multi-format Ashes series in Australia, captain...

Sporting Life: Stars must vaccinate and lead – Djokovic didn’t and it’s costing him

Novak Djokovic should have pulled up the sleeve of his Lacoste T-shirt, presented a talented arm which is as hard as a cable and let them jab a needle in. A Pfizer vaccine would...

I retired at 50, went back to work at 53, and then a medical issue left me jobless: ‘There’s no such thing as a safe amount of [retirement] money’

Dear MarketWatch,  I had always said I was going to retire when I was 50. I had worked and saved since I was 16. Retiring without Medicare and Social Security is a scary thing. I...

My Daughter’s Married Boyfriend Shouldn’t Join Us on Vacation, Right?

My 30-year-old daughter is in a polyamorous relationship with a married man. She brought him home for the holidays, and while he was charming, I felt uncomfortable. (This may have...

For the past two months, Palantir Technologies (NYSE:PLTR) has been in sell-off mode. Due to disappointing earnings, plus the cycling out of tech growth stocks ahead of planned rate hikes, PLTR stock has dropped from around $26.75 per share to around $16.75 per share.

Bouncing back in recent days, after falling down to near the $15 per share price level, it may seem as if it’s on the verge of bottoming out. Or is it? Despite its big drop in price, shares in the data analytics software company still sport a very high valuation.

Granted, this by itself isn’t an issue. Assuming it continues to grow at an above-average clip, albeit at a slower pace than in past years. But even if this ends up happening, the main factor that’s driving it lower (rising interest rates) isn’t going away. Some may believe that high inflation, and the Federal Reserve’s response to it, is already baked-in.

However, it’s possible that the Fed will have to become more hawkish before it gets inflation under control. With higher rates will come more multiple compression. In short, the risk that this former high-flier’s sell-off could carry on in the months ahead.

The Latest With PLTR Stock

Market-related factors have resulted in big moves for shares. Company-related factors, on the other hand? There has been the announcement of a few contract wins. Otherwise though, there’s been little news out of Palantir since its last quarterly earnings release on Nov 9.

As I discussed in my last PLTR stock article, the company reported top line results in-line with expectations. Yet numbers from its governmental business fell short. To some extent, there’s an expectation that this segment will slow down, with its commercial segment picking up the slack.

Sure, as seen from recent headlines, like its deal with Hyundai Heavy Industries, it’s not as if the company isn’t building up its book of business. Still, it’s still not for certain whether this will enable it to sustain 30% annual revenue growth. Then again, if it delivers much better numbers when it next reports results in February? My skepticism could be proven wrong. But that may not necessarily result in a recovery for shares.

In fact, it may not even be enough to sustain its current price.

Fed Policy Changes Could Cause More Trouble for Palantir Investors

With growth stocks down big since the Fed started moving toward raising rates, it may seem like this change is already priced-in. After all, even as inflation data remains bad, indicators of rising rates, such as treasury yields, have lately ceased surging higher.

This argument suggests that the growth stock sell off is over. In short, now’s the time to “buy the dip” with names like PLTR stock, ahead of their recovery. But it may be premature to say that Fed policy changes will no longer impact its performance. As the central bank’s chairman, Jerome Powell, put it during a recent U.S. Senate Committee hearing, “If we see inflation persisting at high levels longer than expected, then if we have to raise interest more over time, we will.”

Trading for 113.9x projected earnings for 2021 (15 cents per share), and 81.9x projected 2022 earnings (20 cents per share), PLTR stock still has room for more multiple compression. I’m not saying its forward price-to-earnings (P/E) ratio will compress to say, 30x or 40x. Yet even a move down to a multiple that values it at 60x this year’s earnings would send it down to around $12 per share, more than 28% below where it changes hands today.

The Verdict: Still Too Early to ‘Buy the Dip’

Besides the prospect of it falling some more before it bounces back, keep in mind that a Palantir rebound could wind up partial at best. It may not have the ability to trek back to above $30 per share, or perhaps even back to its all-time high of $45 per share.

Why? The “meme crowd” is no longer going bananas for it. Discussion of it, as seen in daily activity data on Reddit’s r/WallStreetBets, has fallen considerably. In other words, upside potential may be lower than it appears at first glance.

Weighing the risk it drops to $12 per share, against the prospect of it, at best, moving back to the mid-$20s per share? Consider it too early to “buy the dip” with PLTR stock.

On the date of publication, Thomas Niel did not have (either directly or indirectly) any positions in the securities mentioned in this article. The opinions expressed in this article are those of the writer, subject to the InvestorPlace.com Publishing Guidelines.

Thomas Niel, a contributor for InvestorPlace.com, has been writing single-stock analysis for web-based publications since 2016.

Weighing the risk it drops to $12 per share, against the prospect of it, at best, moving back to the mid-$20s per share? Consider it too early to “buy the dip” with PLTR stock. 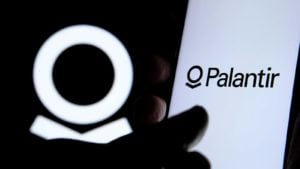 How to Trade Zoom Stock After Its News-Driven Drop

Zoom Video Communications (NASDAQ:ZM) shares have had a rough week on the news front, and sellers have been quick to strike. This morning’s 2.5% gap lower at the open brings the...

This Coronavirus Crisis Will Mint Millionaires

“The time to buy is when there’s blood in the streets.” Source: Shutterstock That sounds harsh, but it is an often-quoted investing axiom credited to Baron Rothschild. Maybe he...