SINGAPORE – Sports coaches who train schools are bracing themselves for a further hit in income following news that the National School Games would continue to be suspended...

STARTLING images show the moment a man was caught having sex with a BMW during Switzerland’s coronavirus lockdown.  The incident occurred in the city of Basel when the...

TWO men have been arrested after they rammed a car into Barcelona’s El Prat airport. The two Albanian men were arrested by Mossos d’Esquadra (the local police) at...

B. Riley Is the Top Company Cashing in on the Retail Apocalypse

Over the past months I’ve been researching companies that I call tails-you-win, heads-you-win opportunities. These are companies in businesses that profit during good economic...

At This Point, Ford Stock Isn’t Even Worth a Test Drive

If misery loves company, Ford (NYSE:F) stock investors are no longer alone. Yet in a market that’s been driven into a bearish panic, the choice to steer clear and allocate funds...

After a 70% Fall, SPCE Stock Could Be a Buy for the Long-Term Investor

Year-to-date, Virgin Galactic (NYSE:SPCE) stock is up about 9%, but that number tells only half the story of the spaceflight company’s shares. On Feb. 20, SPCE stock hit an...

VISA (NYSE:V) stock has weathered the coronavirus storm fairly well. Granted it is down over 26% from its peak in mid-February. But this is not as bad as many other stocks....

Deeply Embattled OXY Stock Is About to Get Drilled

At this point in the game, picking publicly traded oil companies is less an exercise of forecasting which one of them will perform well; instead, it’s all about which isn’t going...

Now Is the Time to Find and Buy Your ‘Forever Stocks’

Last Tuesday seems like a lifetime ago. But that was the day I sent a Smart Money report that opened with these two sentences: “Stock market routs are miserable events. They sow...

YouTube is reducing the quality of its videos in Europe, as an increase in home usage strains the continent’s internet during the novel coronavirus outbreak, Reuters reports. “We...

Sentiman io
Man filmed having sex with a BMW amid...
Posted on 20th March 2020 by Sentiman io

STARTLING images show the moment a man was caught having sex with a BMW during Switzerland’s coronavirus lockdown.

The incident occurred in the city of Basel when the owner of the car was woken by moaning sounds from the street at around 3.30am.

She said that she leaned out her window to see the man leaning over her car with his bare behind facing her.

Footage showed the man sprawled over the bonnet of the car making humping motions and short yelping noises.

He is then seen pulling up his trousers and walking away.

“The maniac had sex with my BMW,” she told local media.

She said the car wasn’t damaged in the incident, but did leave visible marks, adding that she washed that car as soon as possible.

She also said she had never seen the young man in the neighbourhood before.
A friend of the owner said: “I was shocked.”

The incident comes as the streets of Switzerland are quiet amid a coronavirus lockdown.

The country has so far seen almost 5,000 cases and 43 deaths confirmed amid the outbreak.

Its government has declared a state of “exceptional” emergency, closed its borders, and banned all public and private events.

The Canton of Geneva has also banned prostitution, usually legal and regulated in Switzerland.

The behaviour of the man in the images is consist with mechanophilia, a sexual attraction to machines such as bicycles, motor vehicles, helicopters, ships, and aeroplanes.


Can you spot what the cameras are pointing at…and why one false move could kill?

DEATH OF A HERO


‘Healthy’ paramedic, 46, killed by virus after telling wife he was fine

Publicised cases include a 30-year-old German woman identified as Michele Kobke who has been in a “relationship” with a Boeing 737 for five years.

She reportedly calls the plane “Schatz” – German for “treasure” – and says that she is in love with it. 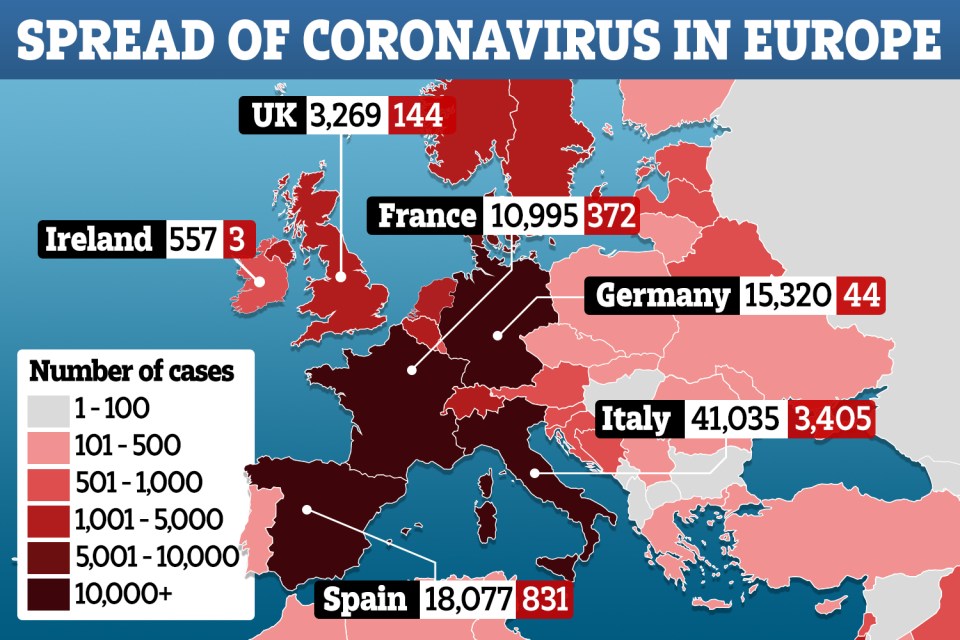 The man’s behaviour fits with mechanophilia, a sexual attraction to machines[/caption]

STARTLING images show the moment a man was caught having sex with a BMW during Switzerland’s coronavirus lockdown.  The incident occurred in the city of Basel when the owner of the car was woken by moaning sounds from the street at around 3.30am. ⚠️ Read our coronavirus live blog for the latest news & updates […]

HUNDREDS of cats and dogs abandoned in the outbreak city of Wuhan are being ruthlessly executed by the Chinese authorities, say reports. Many of the starving pets were left alone...

ONE of Italy’s worst affected coronavirus regions is considering a seven day working week to kick start its crippled economy. Attilo Fontana, president of the Lombardy...