The world on Thursday marked the one-year anniversary of the death of Diego Maradona, regarded by some as the best football player of all time and a man adored in his home country...

In a 14,000-page report handed to President Barrow gives details of nearly 400 victims of torture, killing and rape. A long-awaited report into allegations of abuse committed...

Brisbane company worth just $8 when awarded $385m Nauru offshore processing contract Since 2017 the contract – now worth $1.6bn – has been amended seven times without competitive...

Let’s talk about sex: how Cardi B and Megan Thee Stallion’s WAP sent the world into overdrive

Writer Atabek, 68, known as a fierce critic of the Nursultan government, was receiving treatment for a COVID-19 infection. Kazakh dissident Aron Atabek has died less than two...

LONDON (AFP) – Ralf Rangnick is close to finalising a deal to become Manchester United’s interim manager as they seek a replacement for the sacked Ole Gunnar...

On the International Day for the Elimination of Violence Against Women, a series of graphics show how prevalent male violence against women and girls worldwide. November 25 is the...

Thousands resume protests in Sudan days after the military signed a new power-sharing deal with the prime minister. Sudanese security forces have fired tear gas at thousands of...

WILD footage shows Vladimir Putin’s dog paratroopers jumping from planes 13,000ft in the air as the pooches are readied to be deployed to war zones. From next year, Russian...

The world on Thursday marked the one-year anniversary of the death of Diego Maradona, regarded by some as the best football player of all time and a man adored in his home country Argentina despite, or perhaps because of, his human flaws.

Maradona died of a heart attack last November at the age of 60, weeks after undergoing brain surgery for a blood clot.

The former Boca Juniors, Barcelona and Napoli star had battled cocaine and alcohol addictions for years and was suffering from liver, kidney and cardiovascular disorders when he died.

His death shocked fans around the world, and tens of thousands queued to file past his coffin, draped in the Argentine flag, at the presidential palace in Buenos Aires during three days of national mourning.

He may be dead, but in Argentina Maradona is everywhere.

From ubiquitous mural frescos that portray him as a deity to television series about his life and even a religion bearing his name.

His two goals in the 1986 World Cup quarter-finals, which saw Argentina triumph over England just four years after the Falklands War, made Maradona an instant hero.

In Naples, where Maradona is as much an icon as in Buenos Aires, a statue of him was unveiled outside Napoli’s stadium, which was renamed in tribute following his death.

The club urged fans to arrive at Sunday night’s match with Lazio more than three hours early so they could be present for an “intense” commemoration ceremony, while De Laurentiis said statues would be placed inside Napoli’s stadium.

In the cities, Maradona’s name is memorialized in countless graffiti: “Diego lives,” “10 Eternal” and “D10S” – a play of words with the Spanish word for god, “Dios”, and Maradona’s famous jersey number.

Murals in Buenos Aires depict him with angel wings, as a patron saint complete with halo and sceptre, or back here on Earth, kissing the World Cup.

Maradona is perhaps remembered as much for his “Hand of God” goal – which illegally came off his hand in what he ascribed to supernatural intervention – as for his second in the same match against England which would later become known as the “Goal of the Century”.

For historian Felipe Pigna, Maradona is “a hero with many imperfections” – a mixed bag of qualities that reflects “what it means to be Argentinian”.

In the hearts, on the walls and on the shirts: Maradona is still everywhere in Argentina and Naples, Italy. 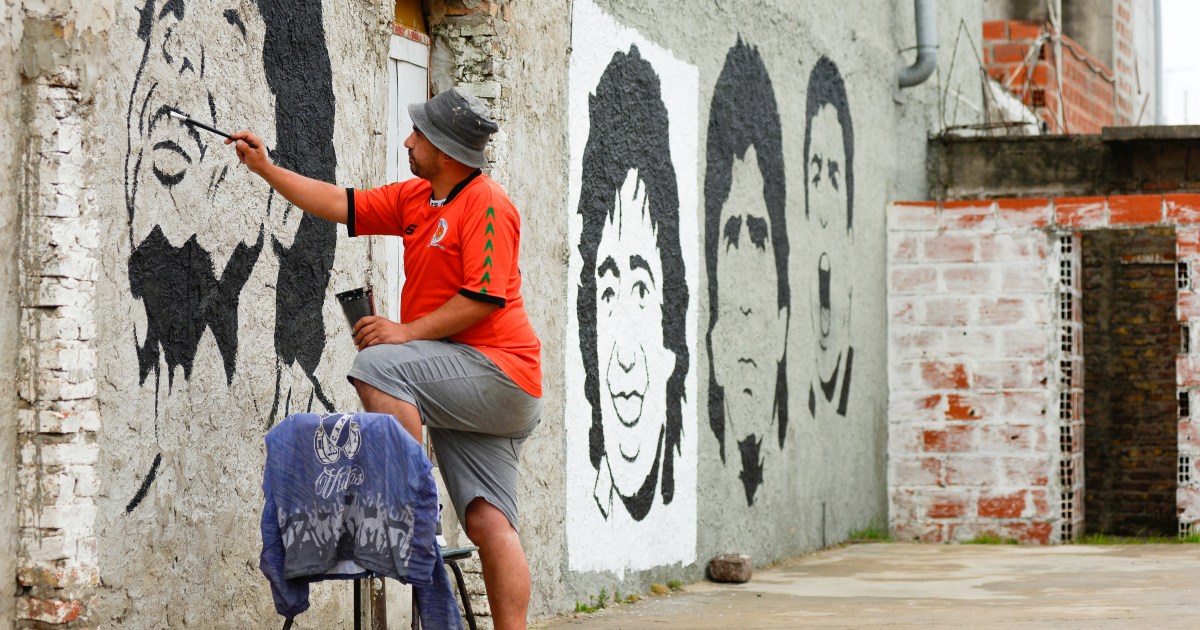 US President Donald Trump has said he will not wear a mask shortly after the Centers for Disease Control (CDC) updated its guidelines to recommend that all residents take the...

Coronavirus: What sporting events are affected by the pandemic?

The outbreak of the coronavirus, which as of April 8 has killed more than 83,000 people globally, has affected sporting events across the world. COVID-19, the disease caused by...