WASHINGTON (AFP) – South Korean Kim Si-woo holed out for eagle from the fairway at the 18th hole on Thursday (Aug 11) to grab a share of the early first-round lead alongside...

Australia’s O’Connor gets the nod at flyhalf against Argentina

Australia flyhalf James O’Connor will start his first test this year in the absence of injured Quade Cooper as coach Dave Rennie largely kept faith with his winning selection...

Before FBI agents raided Donald Trump’s residence at Mar-a-Lago in search of classified documents, the Department of Justice last spring sent the former president a subpoena...

Stop me if you’ve heard this one before: A politician seemingly lacking in basic science literacy is spreading falsehoods about female biology on social media. The award this time...

Following the successful implementation of The Merge into Ethereum’s Goerli testnet, Ethereum developers confirmed during a Consensus Layer Call livestream that the highly...

Attorney General Merrick Garland announced Thursday that he had “personally approved” the decision for the FBI to seek a search warrant to raid former President Donald Trump’s...

Heat pumps: what they do and why they’re hot now

The humble heat pump has finally found its moment in the spotlight. The appliance can potentially save you money on your energy bills, fight climate change, and reduce Europe’s...

Thinking about picking up a new Apple Watch? It might be tempting to order one of the Series 7 models, but newer hardware always comes at a premium. And while Apple’s latest...

5 Years Later, The Hunt For The White Supremacists Who Terrorized Charlottesville Continues

The hundreds of right-wing extremists and fascists who , as well a white supremacist elementary school teacher. Other groups in the Ignite The Right coalition include Dixie Tears...

WASHINGTON (AFP) – South Korean Kim Si-woo holed out for eagle from the fairway at the 18th hole on Thursday (Aug 11) to grab a share of the early first-round lead alongside JJ Spaun at the US PGA Tour St Jude Championship.

Kim and Spaun both posted eight-under par 62 to open the tour’s FedEx Cup playoffs, the three-tournament series that culminates with the Tour Championship where an US$18 million (S$24 million) winner’s prize will be on offer.

Kim hit 14 of 18 greens in regulation at TPC Southwind on Thursday, but his most spectacular hole didn’t involve a putt.

He was on the right side of the fairway at the 453-yard 18th, where his eight-iron from 171 yards out found the hole.

“It was a perfect shot,” said Kim, who said he was just trying to get the ball to 10 feet, left of the pin.

Kim followed his birdies at the second and third with a three-putt bogey at the fourth.

Feeling uncomfortable on the greens, he said he changed his putting grip,and then rolled in a 21-foot birdie from the fringe at the 10th before making four birdies in a row at the 13th, 14th, 15th and 16th.

That run featured a 23-foot birdie at the 14th.

Spaun’s day also included a run of four straight birdies, from the ninth through the 12th. He started with a 14-foot birdie at the first and a four-footer at the second, rolled in a 17-footer at the ninth and added two more birdies at 16 and 18.

“I’m hot, figuratively and literally, I guess,” Spaun quipped after his round in the steamy Tennessee weather.

“I think I putted really well and I drove it really well. I guess I hit 15 out of 18 greens. So that’s a pretty good combo.

“When you’re hitting a lot of greens and putting well and hitting fairways, it’s hard to complain about how I played today.” 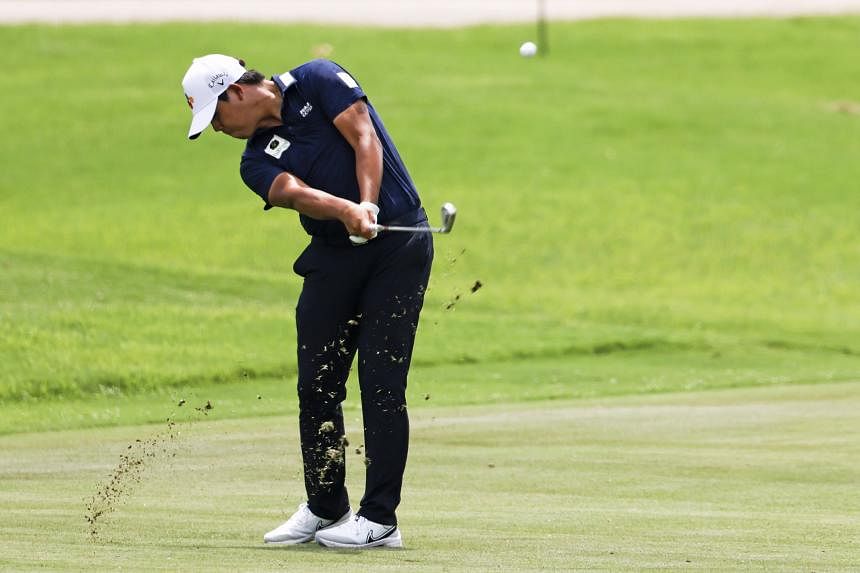 REUTERS: Arsenal and midfielder Mesut Ozil have reached an agreement in principle to terminate the German’s contract six months before it expires so he can seal a move to...

LIVERPOOL, England: Aston Villa suffered a devastating blow in their battle for Premier League survival when Theo Walcott headed a late equaliser to earn Everton a 1-1 draw at...