BAFOUSSAM, CAMEROON (AFP) – Frank Mhango scored twice as Malawi came from behind to defeat Zimbabwe 2-1 on Friday (Jan 14) in the Africa Cup of Nations and keep alive their...

BAFOUSSAM, CAMEROON (AFP) – Frank Mhango scored twice as Malawi came from behind to defeat Zimbabwe 2-1 on Friday (Jan 14) in the Africa Cup of Nations and keep alive their hopes of reaching the second round for the first time.

The forward from South African club Orlando Pirates netted in each half after Ishmael Wadi had put Zimbabwe ahead in a lively Group B match in Bafoussam.

Mhango recently returned to action after a lengthy injury layoff and became only the third player after Cameroonians Vincent Aboubakar (twice) and Karl Toko Ekambi to bag a brace so far in this Cup of Nations.

Guinea and Senegal share the Group B lead with four points each after two rounds of matches, Malawi have three and Zimbabwe are pointless.

Group winners and runners-up qualify automatically for the round of 16, along with the best four third-placed teams.

“Congratulations to my boys, who deserved to win because they worked so hard,” said Malawi coach Meck Mwase as the country celebrated only their second Cup of Nations win after beating Algeria 12 years ago.

Zimbabwe coach Norman Mapeza admitted their chances of making the last 16 were slim, saying “our only hope is to qualify as a third-placed team and to do so we must beat a good Guinean team convincingly”.

After the presence of Liverpool duo Sadio Mane and Naby Keita in the first half of a double-header – a 0-0 draw between Senegal and Guinea – there were no instantly recognisable Malawi or Zimbabwe stars.

Malawi began with five local players, five based in South Africa and one in Mozambique while Zimbabwe had in forward Tino Kadewere from French club Lyon the only starter from a top-five European league.

After a slow start at the 20,000-capacity Stade Omnisport in the western Cameroon highlands, the game burst into life as half-time approached.

Zimbabwe went ahead on 38 minutes when an Onismor Bhasera cross allowed Wadi to score with a perfectly placed looping header that just eluded the outstretched hand of goalkeeper Ernest Kakhobwe.

The advantage lasted just five minutes, however, before another cross from the left flank, this time by Francisco Madinga, produced a goal with Mhango poking the ball into the net from close range.

Malawi, who lost injured captain and defender Limbikani Mzava just before the half-hour, left the field at half-time the happier team having survived several scares.

Gerald Takwara and Wadi wasted good close-range chances to break the deadlock in the latest episode of a southern Africa rivalry previously dominated by Zimbabwe.

Mhango struck again on 58 minutes to edge the Flames in front, taking advantage of defensive hesitancy by Teenage Hadebe to push the ball past goalkeeper Petros Mhari.

Guinea and Senegal share the Group B lead at four points each after two rounds of matches, while Malawi have three. 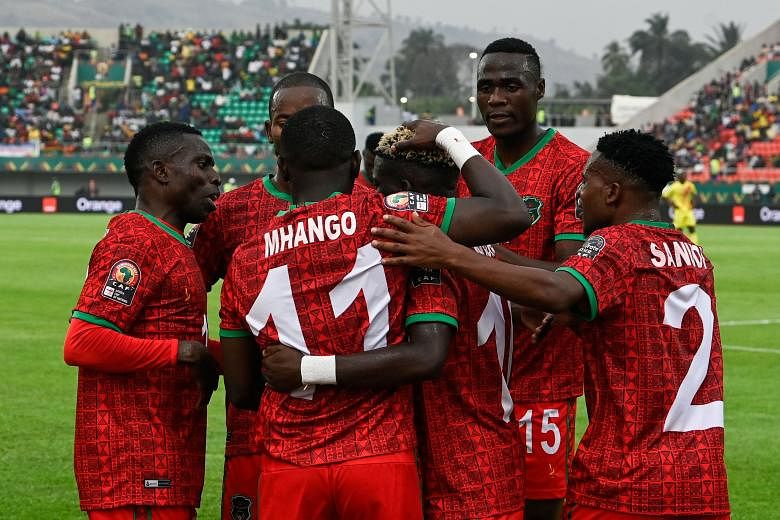