‘Diego lives on’: Argentines pray for Maradona on anniversary of his death

BUENOS AIRES: Fans and family of Diego Maradona in Argentina and around the world gathered on Thursday (Nov 25) to remember and pray for the troubled soccer star on the first...

Mystery as Brazilian rapper found dead in sea after being ‘tortured’

Shock and pity mix along UK coast where Channel tragedy played out Workers outside the RNLI station in Dungeness, Kent, load up deflated dinghies used to transport people across...

A WOMAN who carved open her pregnant pal and then stole her unborn baby has been jailed. Rozalba Maria Grime, 27, from the southern Brazilian state of Santa Catarina, lured Flavia...

Ironically, if you’re looking for a great Apple deal this Black Friday season, you shouldn’t shop at Apple. That’s because Apple doesn’t typically offer discounts on its new...

Google to pay £183m in back taxes to Irish government

Google to pay £183m in back taxes to Irish government Firm’s subsidiary in Ireland agrees to backdated settlement to be paid in addition to corporation tax for 2020 Parent company...

JOHANNESBURG: South African Thriston Lawrence and Angel Hidalgo of Spain had a share of the lead at six-under-par before a thunderstorm suspended play for the day in the first...

The Oculus Quest 2 is an all-around solid piece of hardware, and it’s a very popular holiday gift since there are some great deals happening now. But anyone who already owns one...

‘Diego lives on’: Argentines pray for Maradona on anniversary of his death

BUENOS AIRES: Fans and family of Diego Maradona in Argentina and around the world gathered on Thursday (Nov 25) to remember and pray for the troubled soccer star on the first anniversary of his death.

In a church in Garin, in the province of Buenos Aires, family members joined a Mass in his memory, with a large portrait on the altar of the 1986 world champion, known as “Pelusa” for his long mane or just “D10S” – a play on the Spanish word for God and his famous No 10 jersey.

“He is here, we believe our loved ones resurrect, they do not die, he lives on in every action and every good deed that he did, and the bad actions as they talk about everywhere, may God forgive them.”

Maradona, who died on Nov 25, 2020, of cardiac arrest at age 60, was born in a poor section outside the capital Buenos Aires. He was an icon to many in Argentina and around the world, including Naples, Italy, where a statue of Maradona was unveiled on Thursday.

But his personal life was marked by controversy, including excesses with drugs and alcohol. A Cuban woman who had an affair with him two decades ago, when she was 16 and he was around 40, accused him this week of raping her on one occasion.

The star, widely thought to be one of the greatest soccer players in history, was buried last year in Argentina. However, his family said on Thursday that they had now requested the construction of a mausoleum for his fans to “go on pilgrimage.”

It would be “an eternal resting place where he can be visited and receive the recognition and love from the millions of people who express it every day,” said a post on Maradona’s Instagram account, now managed by his family.

After the Mass, his sister Anamaria Maradona said the past year had been “very sad.” Asked how she recalled her brother now, she said: “With lots of love”.

Maradona, often compared to Brazilian legend Pelé, gained an unusual level of adoration despite – or perhaps strengthened by – his own personal struggles. He has been immortalised in murals, statues and even tattoos inked into fans’ skin.

“The love for Diego has accompanied me since I was little, since childhood,” said Gustavo Emanuel Parisi, 35, an artist who paints murals of Diego’s portrait.

“With the love that I have, I came to pay tribute to him with what I can and with what I have, which is this way, making some murals in honour and in gratitude to him.” 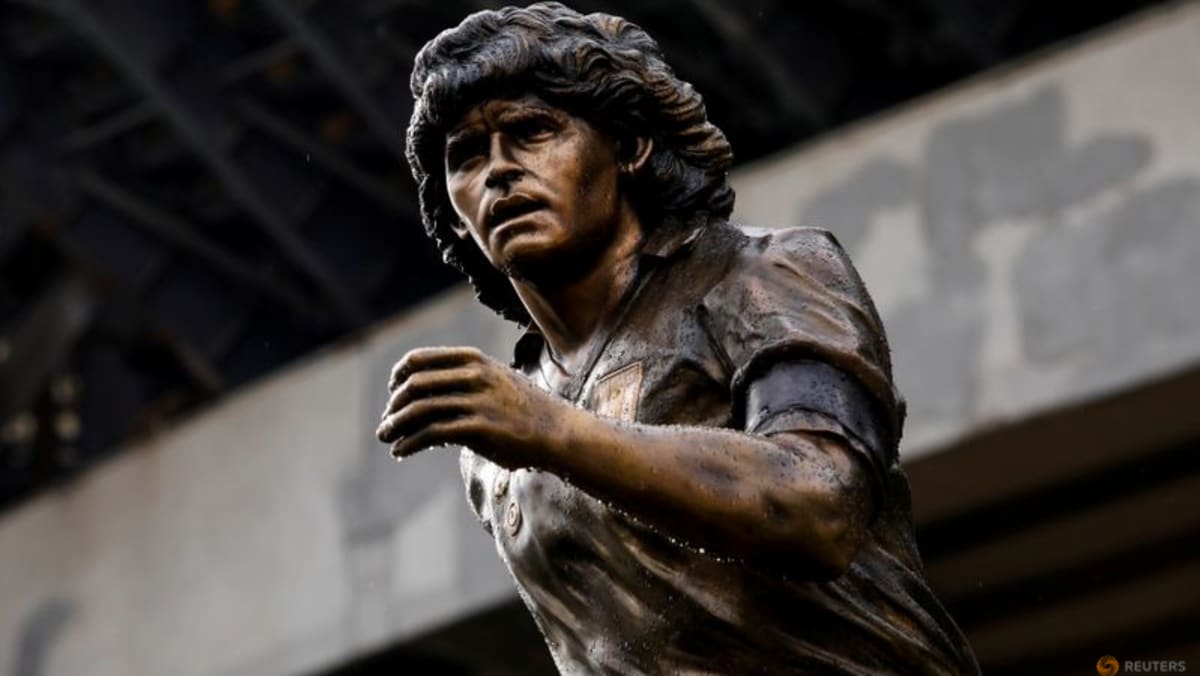 LONDON: David de Gea has spoken of his pride after surpassing Peter Schmeichel’s appearance record for an overseas player at Manchester United. The Spanish international,...