Back to Latest Articles
Politics

Why Is Deutsche Bank More Worried About Trump Than Jeffrey Epstein?

Donald Trump owes Deutsche Bank roughly $340 million. The German bank will reportedly look to sever ties with Donald Trump after the election. This is the same bank that sought...

By Svea Herbst-Bayliss and Chibuike Oguh (Reuters) – Wall Street breathed a sigh of relief on Wednesday, as the latest U.S. election tallies pointed to a divided government...

PARIS: Argentina’s Diego Schwartzman sent a message of support to his namesake and sporting idol Diego Maradona after his 7-5 6-3 win over Frenchman Richard Gasquet in the...

The International Monetary Fund (IMF) is encouraging countries to create money to mitigate the effects of lockdown restrictions on economies. Specifically, the international...

PARIS (AFP) – German tennis player Alexander Zverev said on Wednesday (Nov 4) that accusations by an ex-girlfriend that he attacked her last year were “not...

Football: Burnley skipper Mee back in contention for Brighton visit

(Bloomberg) — Biogen Inc.’s experimental Alzheimer’s disease therapy appears effective despite conflicting clinical-trial results, according to a report by staff of the U.S....

If a form is not returned by the set date, Britons could risk having their claim denied altogether.  There are 13 questions claimants will have to answer when completing the PIP...

Why Is Deutsche Bank More Worried About Trump Than Jeffrey Epstein?

Sentiman io
Why Is Deutsche Bank More Worried About...
Posted on 5th November 2020 by Sentiman io

Deutsche Bank is getting its affairs in order. After working with child-trafficker Jeffrey Epstein, the German bank is taking no risks on Donald Trump.

Curiously, on election day, it decided to announce that it will look to sever ties with the president.

Considering the bank actively sought out Epstein as a client after he was a convicted sex offender, one has to wonder why they’re so spooked about Donald Trump.

Three senior bank officials told Reuters that Deutsche Bank is “looking for ways to end its relationship with President Donald Trump after the U.S. elections.”

The bank is tired of the negative press associated with the president. And apparently, so is everyone else.

Deutsche Bank discussed selling their $340 million worth of loans to Donald Trump off in the secondary market but did not know who would want to buy them.

Since Trump personally guaranteed payment on the loans, the bank could seize his assets if he fails to repay. The bank officials said that it would be easier to do so if he loses this election. This could explain the timing of their announcement.

The controversial bank appears to be drawing a line in the sand after gaining a terrible reputation for past business dealings. And it’s telling that Donald Trump is the tipping point.

In 2013, JPMorgan Chase & Co. dropped Jeffrey Epstein as a client due to ‘reputational concerns,’ according to The Wall Steet Journal.

It onboarded Jeffrey Epstein that same year, five years after he was convicted of procuring an underage girl for prostitution. While a client of the bank, Epstein made numerous ‘red flag’ transactions that should have been investigated.

Check out how the bank may have helped Jeffrey Epstein run his sex trafficking ring: 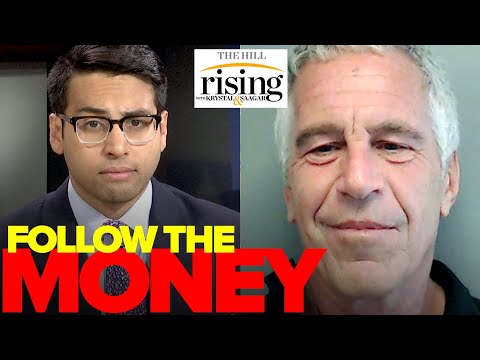 When regulators finally investigated the transactions, they concluded:

Whether or to what extent those payments or that cash was used by Mr. Epstein to cover up old crimes, to facilitate new ones, or for some other purpose are questions that must be left to the criminal authorities, but the fact that they were suspicious should have been obvious to Bank personnel at various levels. The Bank’s failure to recognize this risk constitutes a major compliance failure.

They were fined $150 million due to the breakdowns of their internal safeguards.

Now, Deutsche Bank appears to be trying to avoid another controversy as they attempt to distance themselves from Donald Trump.

We don’t know the details of Donald Trump’s finances, but thanks to The New York Times, we do know that he’s avoided taxes and has hundreds of millions of dollars in debt coming due.

And then, of course, there are his own associations with Epstein. The Trump family had their own section in Jeffrey Epstein’s infamous little black book. And we can’t forget Trump’s well-wishes to Epstein co-conspirator Ghislaine Maxwell.

Only time will tell what kind of shady dealings Trump may be involved in. But if morally bankrupt institutions like Deutsche Bank are more afraid of associating with him than Jeffrey Epstein, you can bet something is up.

Disclaimer: The opinions expressed in this article do not necessarily reflect the views of CCN.com.

Donald Trump has long pushed for the kind of dovish Fed policy Jerome Powell has delivered this year. While championing the working class, Trump is presiding over a flood of...

3 Ways Donald Trump Could Profit from the Death of the U.S. Postal Service

The U.S. Postal Service just announced that it’s cutting back on hours across the board. This reduction will lead to delays in mail delivery. A decline in mail delivery will make...