A Russian arbitration court of appeals has recognized cryptocurrency as a property with value in its ruling on Monday. This overturned a previous ruling by another court even...

A Norwegian district court has ruled in favor of Norway’s largest bank against a local cryptocurrency exchange. The court says the bank has full rights to close the account of the...

People get into crypto for myriad reasons, but the most common denominator is making money. One of the most toughest and also easiest way to make money in crypto is through...

After rising to a week high of $838 on Sunday, a downwards price correction attempt began pulling ethereum price downwards to a day low of $685 on Monday. Even though the price of...

The Blockchain Economy Is the Result of Political and Social Realities: An Interview with James Haft of CryptoOracle

There’s a strong sense of community in crypto, whether it’s troubleshooting wallet setup, collaborating on GitHub, or answering the questions of interested and skeptical friends....

Since music and film became digitized, both the RPAA and Hollywood have fallen victim to a multitude of platforms that have come into existence, making content freely available...

What Is Nexo Cryptocurrency?

It is estimated that the digital asset market, which consists of currencies like Bitcoin, Ethereum, and Litecoin, will grow to a staggering US$5 trillion by 2058. This domain has...

Cryptocurrency Communities Just Can’t Get Along

If there’s one thing that rival cryptocurrency factions can agree on, it’s their mutual dislike of one other. Everything else is up for debate, and not calm, reasonable debate,...

Miami-based Cblocks has announced that it will relocate to Canada, citing a lack of regulatory clarity regarding cryptocurrency in the United States as the principal catalyst for...

Mike Finch, the co-founder of ICO Alert, has discussed the present state of the initial coin offering (ICO) industry. Mr. Finch shared his assessment that although the social...

Sentiman io
Cryptocurrency Recognized as Valuable...
Posted on 8th May 2018 by Sentiman io A Russian arbitration court of appeals has recognized cryptocurrency as a property with value in its ruling on Monday. This overturned a previous ruling by another court even though Russia currently has no legal framework for cryptocurrencies. 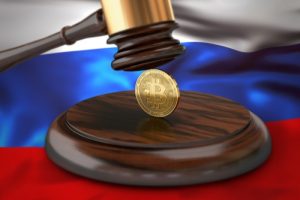 The Ninth Arbitration Court of Appeals ruled on Monday that a bankrupt person’s cryptocurrency must be included in the debtor’s bankruptcy estate, local media reported.

The case involves Russian citizen Ilya Tsarkov who filed bankruptcy in October last year. The court has ordered his cryptocurrencies to be transferred to the trustee, Alexei Leonov, who is expected to be handed the private key to the crypto wallet belonging to Tsarkov soon. According to Vedomosti, Tsarkov owns almost 0.2 bitcoin which is worth approximately US$1,885 at current market rates.

“The cryptocurrency was first recognized as property in Russia,” Ris Novosti reported. Leonov commented that with this ruling:

The court indirectly recognized the cryptocurrency as property and recognized its value.

Prior to Monday’s ruling, the case was heard in February by the Moscow Arbitration Court, which ordered Tsarkov to disclose his cryptocurrency holdings after he revealed to the bankruptcy trustee that he had a wallet at Blockchain.info.

Leonov requested the court to order the transfer of Tsarkov’s cryptocurrencies into the bankruptcy estate, but the court rejected his request at the time, stating that cryptocurrency cannot be used to pay creditors since “the laws of the Russian Federation do not recognize cryptocurrency as property.”

However, with Monday’s ruling, the Ninth Arbitration Court of Appeals overturned the judgment of the Moscow Arbitration Court after Leonov appealed. Russian Legal Information Agency Rapsi conveyed the court’s explanation:

Currently Russian legislation does not provide the definition of cryptocurrency and there are no requirements for its circulation. There is no way to tell if it is property, information or a ‘surrogate’…it is impossible to regulate the relations involving cryptocurrency.

Leonov cited “the position of the European Court of Human Rights on the issue of property and a bankruptcy case in Japan, where a court permitted to sell the debtor’s cryptocurrency,” the agency noted. “The lower court should have taken into account modern economic realities and new information technologies…bad-faith parties could exploit the fact that cryptocurrencies were excluded from bankruptcy estates by converting their assets and thus rendering them inaccessible,” he reportedly conveyed.

What do you think of the court’s ruling? Let us know in the comments section below. A Russian arbitration court of appeals has recognized cryptocurrency as a property with value in its ruling on Monday. This overturned a previous ruling by another court even though Russia currently has no legal framework for cryptocurrencies. Also read: Yahoo! Japan Confirms Entrance Into the Crypto Space Crypto Recognized as Property The Ninth Arbitration Court of […]