US hospitalizations from Covid-19 were at a record high on Sunday, at 125,544, as hospitals struggled to cope and providers made plans to ration care. The current surge of cases...

Sport England all-rounder Moeen Ali has tested positive for COVID-19 upon arriving in Sri Lanka and will self-isolate for 10 days, as will fast bowler Chris Woakes who was deemed...

Sport The Australian Formula One Grand Prix in Melbourne looks set to be rescheduled from its season-opening slot to later in the year due to the COVID-19 pandemic and a...

Sport Eden Hazard, Joao Felix and Antoine Griezmann cost a combined 346 million euros (US$425.44 million) but had to settle for places on the bench as the coaches at Real Madrid,...

Why can’t the stormtroopers in Star Wars shoot straight?

In the Guide’s weekly Solved! column, we look into a crucial pop-culture question you’ve been burning to know the answer to – and settle it, once and for all Regardless of where...

Boxing: Confident Fury says he will knock out Joshua inside two rounds

COLOMBO: Beginning a Test tour with hazmat suits, disinfection spray and isolation would knock many athletes for six, but England’s cricketers are grateful for the cautious...

LONDON: Christian Pulisic has urged Chelsea to prove they have the “character” to end the dismal run that has plunged their season into turmoil. Frank Lampard’s...

Sport England fast bowler James Anderson says he is excited by the challenge of tours to Sri Lanka and India even though it is expected to be tough for seamers on wickets which...

The Guardian Footballer of the Year Marcus Rashford: ‘My mum is everything’

The Guardian Footballer of the Year is an award given to a player who has done something remarkable, whether by overcoming adversity, helping others or setting a sporting example...

Sentiman io
US Covid hospitalizations at record high as...
Posted on 4th January 2021 by Sentiman io

US hospitalizations from Covid-19 were at a record high on Sunday, at 125,544, as hospitals struggled to cope and providers made plans to ration care.

The current surge of cases shows no signs of slowing down: 201,476 reported across the US on Sunday, according to data compiled by Johns Hopkins University. The death toll reached 351,590.

Dr Anthony Fauci, the nation’s top infectious disease expert, and others are warning that an additional surge is likely because of holiday gatherings and cold weather keeping people indoors.

“It could and likely will get worse in the next couple of weeks, or at least maintain this very terribly high level of infections and deaths that we’re seeing,” Fauci told ABC on Sunday.

As the US returns to work after the holidays, states have reported record numbers of cases. In southern California, funeral homes reported being inundated with bodies.

Los Angeles’ mayor, Eric Garcetti, said the pandemic was getting worse in his city as the virus spreads rapidly within households and people let their guard down with news of a vaccine’s arrival.

Many are hanging their hopes on the vaccine rollout, despite its rocky start. The US ramped up vaccinations in the past few days, bringing the number of shots dispensed to about 4m, government health officials said Sunday.

Fauci also told ABC that Joe Biden’s pledge to administer 100m shots of the vaccine within his first 100 days in office was achievable.

Fauci said he has seen “some little glimmer of hope” after 1.5m doses were administered in the previous 72 hours, or an average of about 500,000 a day, a marked increase in vaccinations. He acknowledged the US fell short of its goal of having 20m doses distributed by the end of December.

“There have been a couple of glitches. That’s understandable,” Fauci said. “We are not where we want to be, there’s no doubt about that.” But he expressed optimism that the momentum will pick up by mid-January and that ultimately the US will be vaccinating 1m people a day.

Dr Moncef Slaoui, the chief science adviser to Operation Warp Speed, the government’s vaccine development and distribution effort, told CBS 17.5m doses have shipped. About 13m of those have been distributed to clinics, hospitals and other places where they will be administered, according to Fauci.

The 20m-dose goal hasn’t been reached in part because local health departments and medical facilities had to stay focused on testing to handle a surge in cases, Jerome Adams, the US surgeon general, told CNN. And the holiday season meant health workers were taking time off, he said.

“I don’t want anyone to think I’m being pollyannaish here. There’s what we delivered, and we hope that those will be translated into vaccinations. That has not occurred to the way that we would like.”

Arizona on Sunday reported a one-day record of more than 17,200 new cases, eclipsing the previous mark of about 12,000 set in early December. Health officials said the jump appeared to reflect infections from Christmas gatherings but was also probably inflated by a reporting lag over the new year weekend. North Carolina and Texas reported record numbers of people in hospital with Covid-19 – nearly 3,600 and more than 12,500, respectively.

In the UK, Boris Johnson, the prime minister, said more onerous lockdown restrictions in England were likely as a variant of the coronavirus has pushed infection rates to their highest levels on record. Scientists have said the variant is up to 70% more contagious. While Fauci said the US needs to do its own study, he noted that British researchers believe the mutated version is no deadlier or more likely to make people sicker, and that vaccines are effective against it.

But Scott Gottlieb, a former Food and Drug Administration commissioner who serves on the board of vaccine maker Pfizer, told CBS the variant “really creates more urgency around trying to get this vaccine out more quickly and get more people vaccinated”.

US hospitalizations from Covid-19 were at a record high on Sunday, at 125,544, as hospitals struggled to cope and providers made plans to ration care. 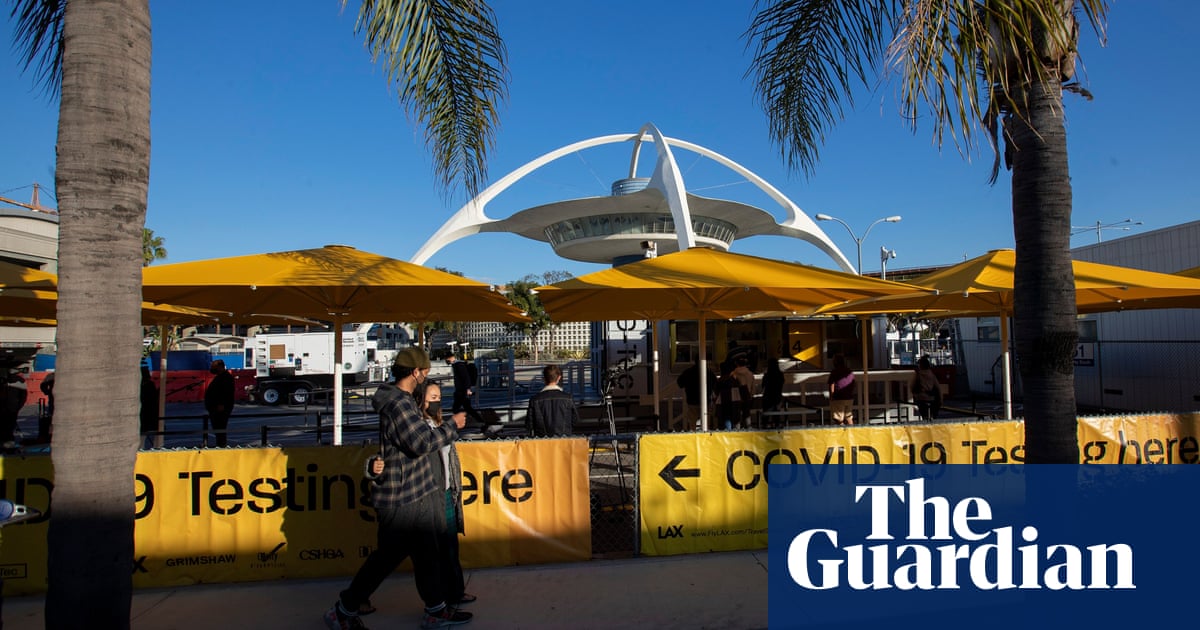 POLICE in Argentina have started making people perform smell tests at roadblocks in their fight against coronavirus. Drivers are being asked if they can smell perfume-soaked...

A BRITISH businessman died after falling 65 feet from a Bangkok motorway flyover after the coronavirus pandemic reportedly decimated his business. The 60-year-old is understood to...