Schoolgirl, 15, butchered brother, 3, then wrote ‘here is your son’ on wall in his blood in chilling message to mum

A SCHOOLGIRL is accused of stabbing her three-year-old half-brother to death before writing “this is your son” on the wall in his blood. The girl, a 15-year-old known...

THE boss in charge of Wuhan’s security during the coronavirus lockdown who has been missing for six weeks is now facing a corruption probe. Sun Lijun, 51, the vice minister...

The impact that COVID-19 is having across the world is terrifying for many, and not only is it affecting our health for those who contract it, it’s also having a wider affect on...

Coronavirus-related deaths in the US exceeded 40,000 with nearly half of all casualties in New York, as protests against “stay at home” orders flared in a number...

On Monday, April 20, at 19:30 GMT:More than 1.3 billion people across India have lived under lockdown for more than three weeks as the government tries to blunt the effect of...

London, United Kingdom – Thousands of EU migrants are working on the front lines of the coronavirus pandemic in the United Kingdom, as doctors, nurses, carers, porters and...

On the coronavirus front line: The life of a NYC paramedic

Before the coronavirus pandemic, life in New York City unfolded amid a cacophony of noise – or as local paramedic Anthony Almojera puts it, the city ran with a constant...

Coronavirus pandemic: Which politicians and celebs are affected?

The coronavirus pandemic has spread to at least 185 countries and territories, with the worldwide death toll from the virus surpassing the 166,000 mark on April 20. Among the 2.4...

Countries around the world are scrambling to halt the spread of the coronavirus pandemic. As of April 20, more than 166,000 people worldwide have died of COVID-19, the highly...

New cases of the novel coronavirus that emerged in the central Chinese city of Wuhan in late December are being reported daily around the world. More than 166,000 people have died...

THE boss in charge of Wuhan’s security during the coronavirus lockdown who has been missing for six weeks is now facing a corruption probe.

Sun Lijun, 51, the vice minister of public security is now being investigated for suspected “severe violations of discipline and law,” the official Xinhua news agency reported.

The probe is being conducted by the Communist Party’s Central Commission for Discipline Inspection, the party’s leading investigatory agency, which has already conducted a nationwide crackdown on corruption under President Xi Jinping.

Reports say Mr Sun was sent from Beijing to Wuhan in February to take charge of security during the coronavirus lockdown.

Mr Sun is just one of several CCP members to face retribution over the coronavirus outbreak.

Both the Hubei Province party secretary Jiang Chaoliang and the party leader in Wuhan, Ma Guoqiang have been fired by Mr Xi

Both officials were replaced in favour of party members thought to be more loyal to Mr Xi.

The investigation into Mr Sun could be seen as a sign of weakness and political infighting among China’s party leaders, according to The Washington Post. 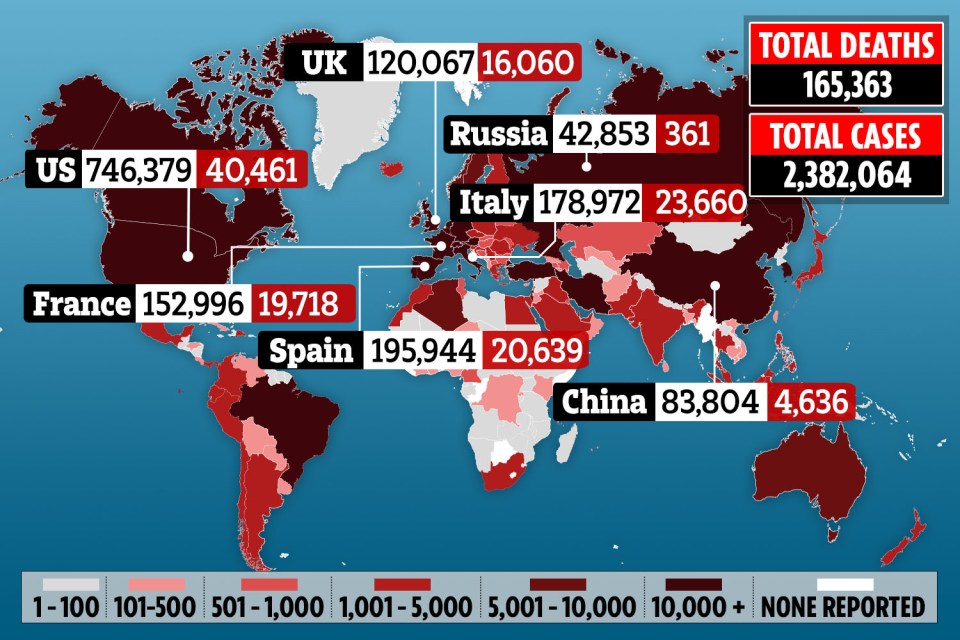 The party announced earlier this month that a Ren Zhiqiang, a real estate tycoon and party member who criticized Mr Xi, had been placed under investigation.

Mr Ren is thought to be close to Chinese Vice President Wang Qishan, China’s financial power broker who is said to be at odds with Mr Xi.

Mr Sun was one of four Chinese intelligence officials who came to Washington and New York in 2017 and are said to have abused their visas after pressuring a Chinese dissident.

China is also trying to crackdown on the whistleblowers who revealed the truth about the coronavirus.

The Mail on Sunday claimed more than 5,100 people have been arrested for sharing information over the virus in the first weeks of the outbreak.

most read in world news

WAR ON THE STREETS


Spain to use disinfectant-spraying DRONES as virus death toll nears 21,000

And it reported any dissidents are being taken into medical quarantine and labelled as sick to stop them from speaking out further.

Other citizens are reportedly even being detained for posting questions online hinting at mask shortages or further deaths.

China’s huge online censorship system, which is known as the Great Firewall, is used to block any information the government deems to be “rumour” — or not a government source.

THE boss in charge of Wuhan’s security during the coronavirus lockdown who has been missing for six weeks is now facing a corruption probe. Sun Lijun, 51, the vice minister of public security is now being investigated for suspected “severe violations of discipline and law,” the official Xinhua news agency reported. ⚠️ Read our coronavirus […]

‘Like I wasn’t a person’: Ethiopian forces accused of systematic rape in Tigray

A gravedigger in Indonesia wearing personal protective equipment rests after the burial of 64-year-old Yoyoh Sa’diah who passed away due to complications related to Covid-19....