SYDNEY (AFP) – Australia’s professional basketball league denied on Friday (April 3) that it had agreed to sell the Illawarra Hawks to teenager LaMelo Ball, who...

SINGAPORE – Sports will officially grind to a halt in Singapore for four weeks from April 7 to May 4, as the Government implements an elevated set of safe distancing...

CORONA beer production has been suspended due to the coronavirus pandemic sparking fears of a worldwide shortage. The previously popular lager, whose coincidentally named brand...

With Traffic Down and Stores Closed, is it Time to Buy McDonald’s Stock?

As the COVID-19 pandemic continues to affect our daily lives and the U.S. economy, investors are wondering if they should buy into shares of restaurant stocks in the second...

During the time of Ebola outbreak, there was one company whose stock price surged by 400%. The same company ended up paying $1.9 million in a false claim lawsuit, as investors...

Grocery delivery company Instacart says it will provide its full-service shoppers with health and safety kits days after some workers walked out over a lack of protection during...

State pension 2020: ‘Good news in difficult climate’ as pensioners to get ‘bumper’ rise

This year, the increase is tied to earnings growth, with the triple lock delivering a 3.9 percent rise to the new state pension and basic state pension. The new rates will come...

TOKYO: Two sumo tournaments scheduled for later this year have been postponed, the Japan Sumo Association said on Friday (Apr 3), the latest sporting events to fall victim to the...

With Wimbledon lost, Federer and Williams running out of Grand Slam opportunities

MUMBAI: The cancellation of Wimbledon this week has not only fanned the possibility of a total tennis wipeout for the rest of the season but may also have put an end to the Grand...

Where is Annie Dookhan from How To Fix A Drug Scandal now?

FOR nearly a decade, Annie Dookhan was considered to be one of the best in her role as lab chemist for the state of Massachusetts. In her position, seen in new Netflix show How To...

CORONA beer production has been suspended due to the coronavirus pandemic sparking fears of a worldwide shortage.

The previously popular lager, whose coincidentally named brand has since a decline in sales since the coronavirus outbreak, will not be produced after Mexico deemed it non-essential.

Grupo Modelo said on Thursday it will temporarily stop brewing Corona beer and other brands exported to 180 countries after its business activities were declared non-essential under a government order aimed at curbing the spread of the coronavirus.

The brewery said it was scaling down its operations to a “bare minimum” in line with the Mexican government’s orders but suggested it could keep brewing beer if its operations were deemed to be agriculture.

Agriculture and food production are among the key sectors which are still allowed to function under Mexican government orders.

The brewer said in a statement: “If the federal government considers it appropriate to issue some clarification confirming beer as an agro-industrial product, at Grupo Modelo we are ready to execute a plan with more than 75 per cent of our staff working from home and at the same time guaranteeing the supply of beer.”

Grupo Modelo operates 11 breweries in Mexico and said the suspension will go into place from Sunday.

Mexico has so far registered more than 1,500 confirmed cases of coronavirus and 50 deaths.

Non-essential activities have been suspended for at least the month of April to slow the spread of coronavirus.

The northern state of Nuevo Leon where Heineken’s Mexican operations are based said on Wednesday it would stop the distribution of beer, sparking panic-buying.

The company suffered another blow last week when plans for a $1.5billion brewery on the U.S. border were rejected in a referendum.

The plant was already two-thirds built but Mexico’s government said it would not grant operating permits after the vote.

Anheuser-Busch InBev, the brewer of Corona and other beers, said last month it believes it has lost $170 million in profits due to the coronavirus outbreak.

The massive lost sales over the last few months coincides with the rising concern over the disease.


Virus model says 2,271 will die on April 15 and the pandemic last until JUNE

MADE UP IN CHINA

‘I KILLED THEM ALL’

The multinational drink and brewing company is based in Belgium, but have offices around the world, including in London and New York.

It produces the Corona brand as well as Budweiser and Stella Artois.

Corona is the third most popular beer in the US behind Guinness and Heineken, according to rankings by the market research company YouGov. 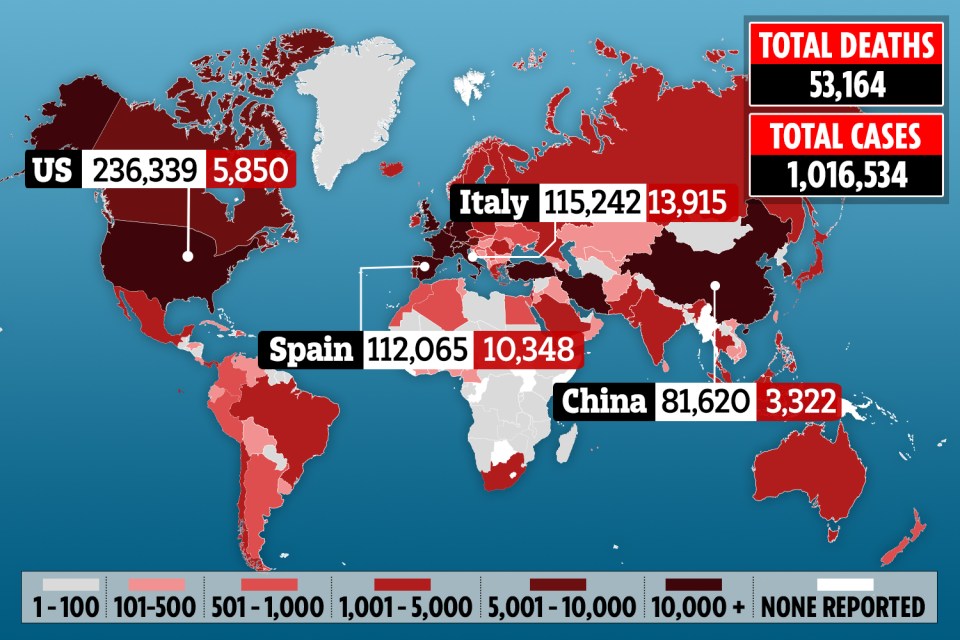 Anheuser-Busch InBev, the brewer of Corona, has reported massive lost profits over the last few months[/caption]

CORONA beer production has been suspended due to the coronavirus pandemic sparking fears of a worldwide shortage. The previously popular lager, whose coincidentally named brand has since a decline in sales since the coronavirus outbreak, will not be produced after Mexico deemed it non-essential. ⚠️ Read our coronavirus live blog for the latest news & […]

GOVERNMENTS around the world are taking unprecedented steps to enforce lockdowns and stop the spread of the coronavirus. Police drones and selfies proving you’re at home are...

Spain accused of ‘recklessly’ easing coronavirus lockdown as millions back at work despite terrifying 18,000 death toll

SPAIN’s government was accused of “recklessly” lifting the lockdown too early today as thousands of workers returned to their jobs. Factories and building sites...