(AFP) – Liverpool kept their slim hopes of reeling in Manchester City at the top of the Premier League alive by seeing off Brentford 3-0 at Anfield to move up to second in...

Eintracht without a win in 2022 after draw at Augsburg

AUGSBURG, Germany: European hopefuls Eintracht Frankfurt drew 1-1 at Augsburg on Sunday to make it two games without a win in 2022 as they missed out on a spot in the top six. The...

LIVERPOOL, England : Liverpool climbed to second in the Premier League after goals from Fabinho, Alex Oxlade-Chamberlain and Takumi Minamino earned them a 3-0 win over Brentford...

LONDON: West Ham United squandered a chance to cement fourth spot in the Premier League as they lost 3-2 at home to Leeds United on Sunday (Jan 16) with Jack Harrison scoring a...

Liverpool beat Brentford to move up to second

LIVERPOOL: Liverpool kept their slim hopes of reeling in Manchester City at the top of the Premier League alive by seeing off Brentford 3-0 at Anfield to move up to second in the...

Two late penalties awarded after intervention by the Video Assistant Referee saw debutants Gambia hold Mali to a 1-1 draw at the Africa Cup of Nations in Limbe on Sunday as the...

LONDON: Rafael Benitez was sacked as Everton manager on Sunday (Jan 16) after just eight months in charge of the struggling Premier League club. Benitez was an unpopular...

Milan won’t sign players for the sake of it: Pioli

ROME: AC Milan won’t sign players for the sake of it during the January transfer window, coach Stefano Pioli said on Sunday (Jan 16), despite the Italian club’s injury crisis in...

Emotional Root insists he is right man to lead England

An emotional Joe Root said he would like to remain as England test captain despite the hurt of losing the Ashes series 4-0 after another big defeat by Australia in Hobart on...

(AFP) – Liverpool kept their slim hopes of reeling in Manchester City at the top of the Premier League alive by seeing off Brentford 3-0 at Anfield to move up to second in the table on Sunday (Jan 16).

Fabinho, Alex Oxlade-Chamberlain and Takumi Minamino scored the goals as the Reds coped without Mohamed Salah and Sadio Mane, who are at the Africa Cup of Nations.

Victory lifts Jurgen Klopp’s men to within 11 points of the runaway leaders, but they also have a game in hand on City.

Liverpool failed to take advantage of an extra man for over an hour as Thursday’s League semi-final, first leg against Arsenal ended 0-0, sparking fears of how they will cope for the rest of the month without two of their main sources of goals.

But a Brentford side that have not won a league game away from home since early October never threatened to cause an upset.

Klopp made just two changes from the Arsenal stalemate as Curtis Jones and Oxlade-Chamberlain were recalled to add extra creativity and dynamism to the midfield.

He was rewarded with a bright start as Diogo Jota headed over, Trent Alexander-Arnold flashed a shot just off target and Alvaro Fernandez made a brilliant save to deny Virgil van Dijk.

However, the crowd were growing restless until Brentford allowed Alexander-Arnold’s corner to bounce inside the area and Fabinho headed in at the back post.

The Bees went toe-to-toe with Liverpool in a pulsating 3-3 draw when the sides last met in September.

But the visitors created only one big chance to get back in the game when Bryan Mbuemo turned Joel Matip and shot inches wide.

Jota hit the post and then should have scored when firing too close to Fernandez in a one-on-one.

There was no doubt over the outcome, though, once Oxlade-Chamberlain’s diving header turned Andy Robertson’s perfect cross into the bottom corner.

(AFP) – Liverpool kept their slim hopes of reeling in Manchester City at the top of the Premier League alive by seeing off Brentford 3-0 at Anfield to move up to second in the table on Sunday (Jan 16). 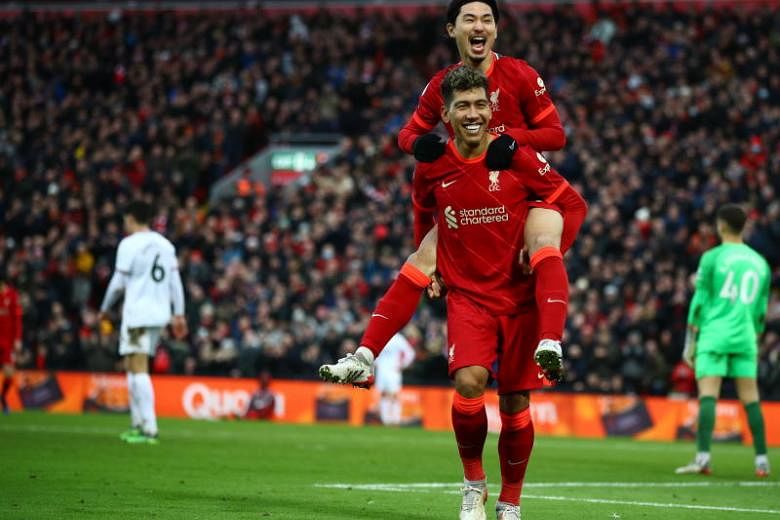 PARIS: Paris St Germain forward Neymar struck early to secure a 1-0 win over 10-man St Etienne as they claimed the Coupe de France on Friday in a near empty stadium as French...