The US military has called off a search for seven marines and a sailor missing at sea for days, saying they were presumed dead.  The military personnel were aboard an amphibious...

India’s Interior Minister Amit Shah, a close aide to Prime Minister Narendra Modi, has been admitted to hospital after testing positive for coronavirus. “I request all...

Ernest Hemingway Experts find hundreds of errors in the writer’s works, mostly made by editors and typesetters Typesetters changed Hemingway’s punctuation and verb tense when...

Nancy Pelosi Says She Does Not Have Confidence In Dr. Deborah Birx

Even though many esports tournaments this year have been postponed or canceled due to the coronavirus pandemic, Riot Games announced that it will hold the League of Legends World...

Mexico has recorded more than 9,000 daily coronavirus cases for the first time, as the country overtook the UK with the world’s third-highest number of deaths from the pandemic...

SILVERSTONE, England: Formula One returnee Nico Hulkenberg’s British Grand Prix ended before the race had started on Sunday, with Racing Point unable to fire up his car in...

Holocaust Diaries and manuscripts turn spotlight on little-known acts of endurance and bravery A Jewish Lithuanian partisans’ group ‘The Avengers’ on their return to Vilna at the...

Sentiman io
US calls off search for seven marines and...
Posted 2nd August 2020 by Sentiman io

The US military has called off a search for seven marines and a sailor missing at sea for days, saying they were presumed dead.

The military personnel were aboard an amphibious assault vehicle that sank on Thursday in deep water off the coast of southern California during a training exercise.

During the 40-hour search, marine, navy and coastguard helicopters, ships and watercraft searched more than 1,000 square nautical miles, the marines said in a statement.

Search and rescue operations for the 7 Marines and 1 Sailor have concluded. All eight missing service members are presumed deceased. Efforts will now turn to search and recovery. All next-of-kin have been notified. Keep our 15thMEU families in your thoughts and prayers. @1stMEF

“It is with a heavy heart that I decided to conclude the search and rescue effort,” said Colonel Christopher Bronzi, commander of the 15th Marine Expeditionary Unit.

A total of 16 service members were on the amphibious vehicle. Eight had been rescued but one later died. Two others remain in critical condition.

All the marines involved were assigned to the 15th Marine Expeditionary Unit, which is based at Camp Pendleton.

The search and rescue operation now shifts to one aimed at finding the bodies of the missing service members, Bronzi said.

The vessel, which was more than 1,000 metres (3,281 feet) off the northwest coast San Clemente Island, reported taking on water late on Thursday afternoon.

The 26-tonne amphibious vehicle was armoured and designed to carry troops from a ship to shore.

At the time, the vessel was returning to a ship from the island, which is used exclusively by the military for training and as a ship-to-shore firing range.

It sank in several hundred feet of water, which the military said was too deep for regular divers to reach it.

The missing were aboard an amphibious assault vehicle that sank Thursday off the coast of southern California. 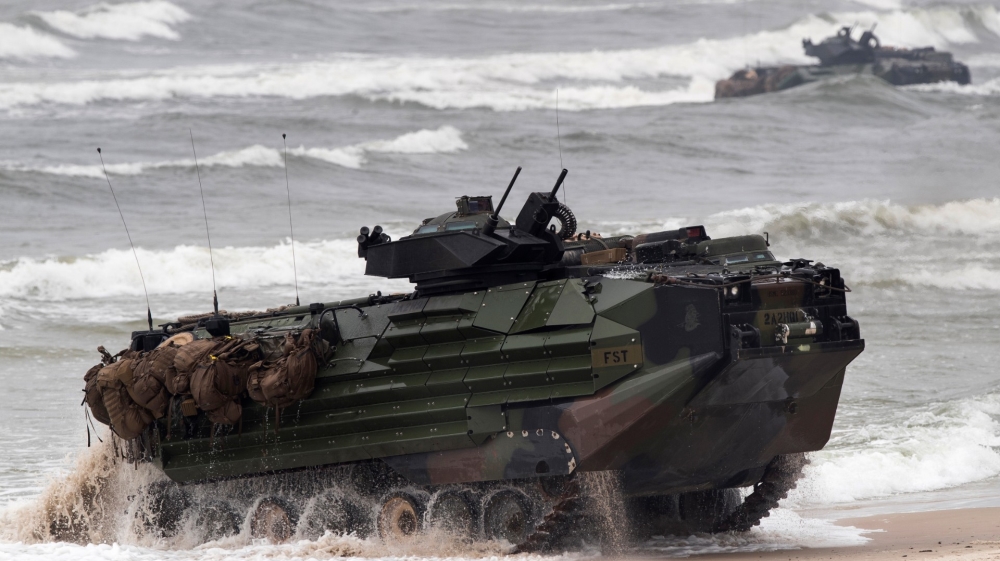 Elizabeth Warren: Who is she, where does she stand on key issues?

Elizabeth Warren has held herself up as an economic reformer working to boost the United States middle class and run an unapologetically progressive campaign, while reportedly...